And here things go again, all changing and rearranging.

I only just got used to the idea of my oldest graduating college and then the idea of her interviewing kind of snuck up (I know, it’s sneaked, but I like snuck better even if it’s wrong) on me and then just really out of nowhere it appears that just weeks after she graduates she’s moving too many states away from me. She’s leaving her mama.

How does that happen? (I’m only partially asking rhetorically. I’m dumbfounded.)

I’m excited–so excited!!!–for her. I’m obscenely proud. I will be thrilled to visit her when she invites me. But selfishly I want her right here, a couple of towns away from me, where I can drive to her when I need to lay eyes on her. She is capable, I know this. But I remember the first time I sent her to camp for two weeks and it felt like forever and I worried endlessly (and needlessly) and walked around feeling like a part of me was absent, like I’d left a piece of my body somewhere I couldn’t see. Out in the rain. And the wind. Dangling from a cliff.

I felt like that again when she moved off to college. You settle into these things and they begin to become okay, that odd feeling that a part of you is not attached ever so slightly starts to fade. You adjust. I know I will adjust, but oh how this part is bittersweet.

So, there is that. An end, a beginning, new adventures. These are good things.

I sent four rolls of film to the lab and hoped I’d get them back before I went to California for work last week. One was a roll of 35mm Lomography Earl Gray film shot on the Minolta SRT 102, and the other three were 120mm film–Kodak Tri-X, a Kodak T-Max and Fuji Acros–all shot on the Bronica SQ-A (the square shots are the Bronica).

These first images are from a neighborhood park on a day that remained foggy all day.

I don’t know about you, but I kind of love fog. It’s mysterious, you know?

The rest are some of the images from that snowy hike with my son a few weeks ago.

I don’t want to put pressure on the kid, but with my daughter leaving I’m kind of hoping he sticks around a little longer.

I know, I know. It’s what they’re supposed to do. I’ll roll with it.

So, an oddity… I never have light leaks in the Minolta SRT 102, but in shooting the 8 x 10 in the snow I have this lovely light leak shooting through. Isn’t that interesting?

If you shoot film, you know about patience. Even if you develop your own film, there’s the waiting. I think even if I was set up to develop my own film right now I’d still probably not have the time to run straight to my darkroom and develop the rolls I’d just shot (but wouldn’t that be lovely?). Even with digital you don’t always have the time to come home after a shoot, upload, sift through for the best shots, process those, etc.

There’s never enough time for the fun stuff, it seems.

Anyway, I spent last Saturday hiking and shooting film with my son, which was wonderful not just because I was out doing my favorite thing but because I was with this human that I like and I was doing my favorite thing, with him. There’s an interesting thing that happens when your kids are grown and you find things you have in common and do them together. Kind of magical, really. You spend all this time parenting them when they are little and then poof, they’re grown up and you’re not hanging out with each other because you have to but because you both want to. Also it was snowing while we were hiking, and that’s just magical in itself.

So I just sent four rolls of black and white film off to the lab and now I do the waiting thing, obsessively checking USPS tracking to see when the package will be delivered. Checking the lab’s website. Checking email for an email from the lab.

I’m trying to get better about this, really, I am.

When I want to shoot color and I want film back quickly, fortunately there is a lab near me that does a great job with C-41 processing. They’re quick, their scans are great, they’re accommodating of my experiments, and their prices are pretty great.

I shot a roll of Rollei Chrome (which my local lab cross-processed) and a roll of Kodak Ektar on a sunny day with my friend Jane a few weeks ago. The cross-processed Rollei Chrome came out super funky and I quite like it. When I asked the lab to cross process it (they don’t do E-6, so I knew I was taking a chance) they warned me that sometimes the roll will come back empty. I was pleasantly surprised by the weird coloring and extra-crunchy grain. 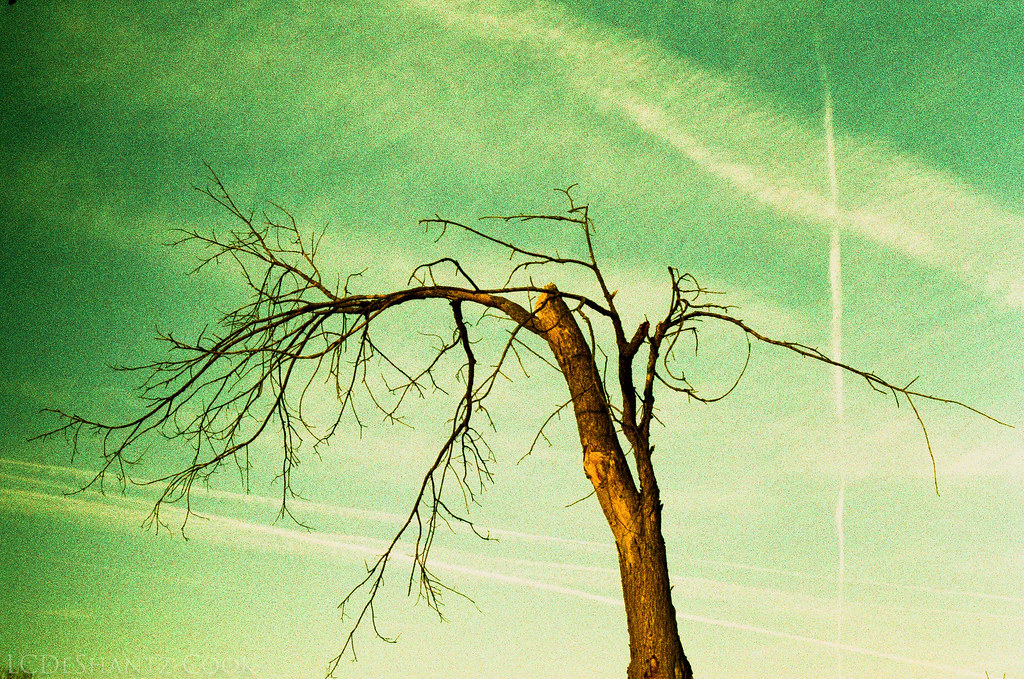 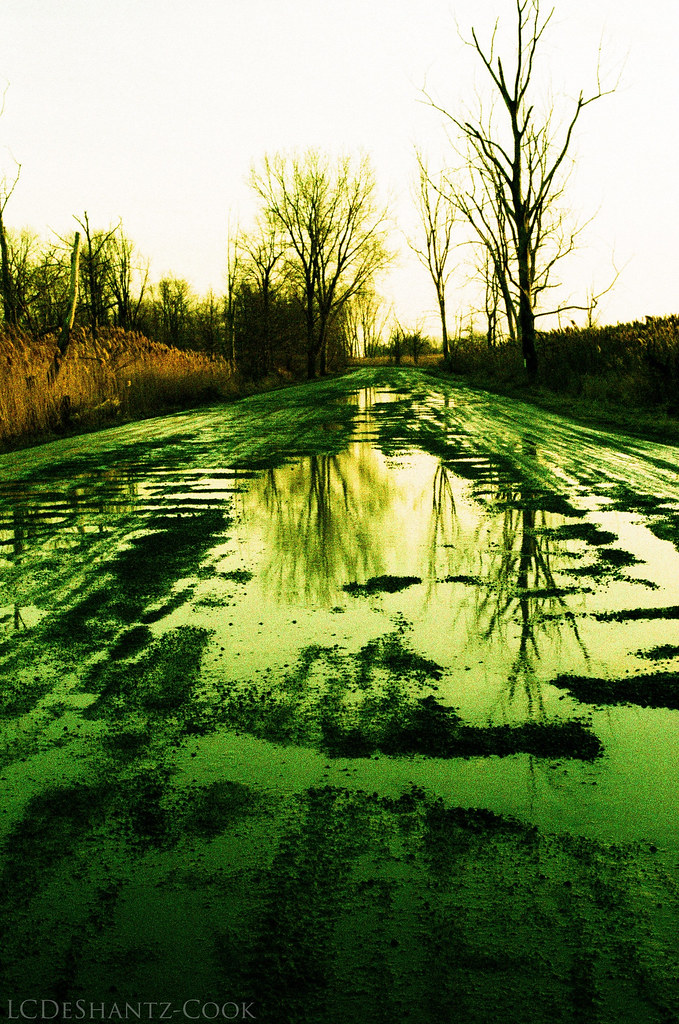 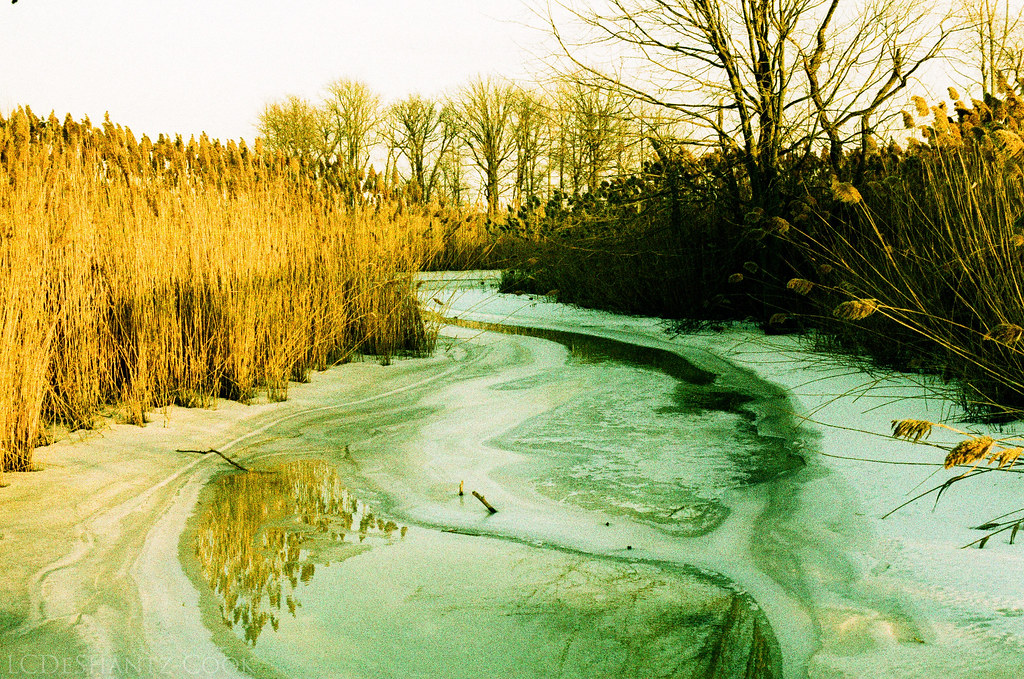 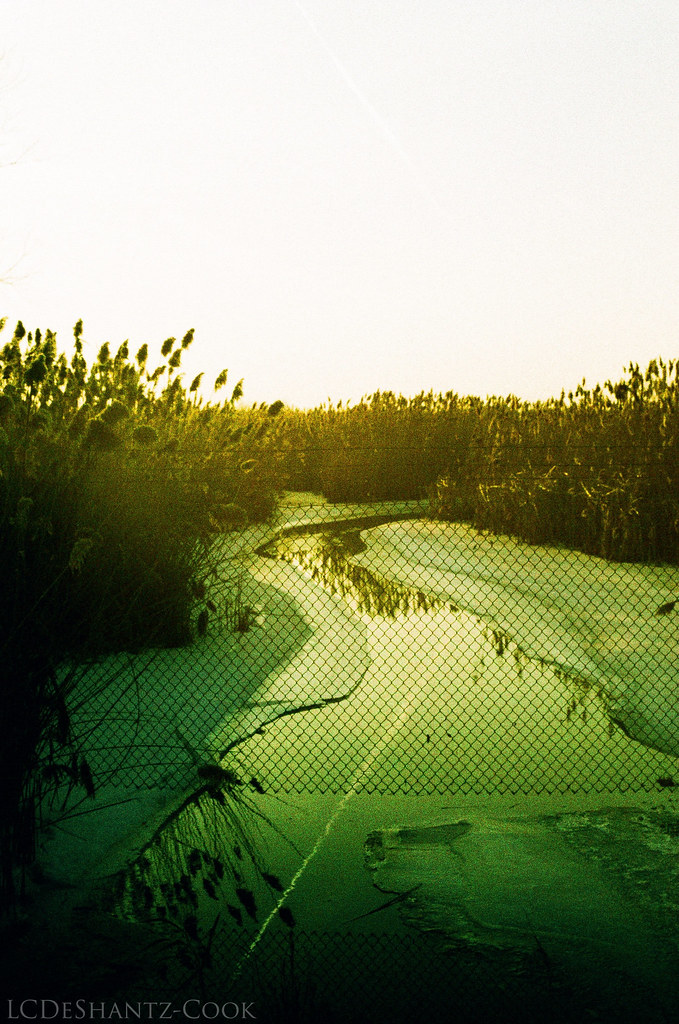 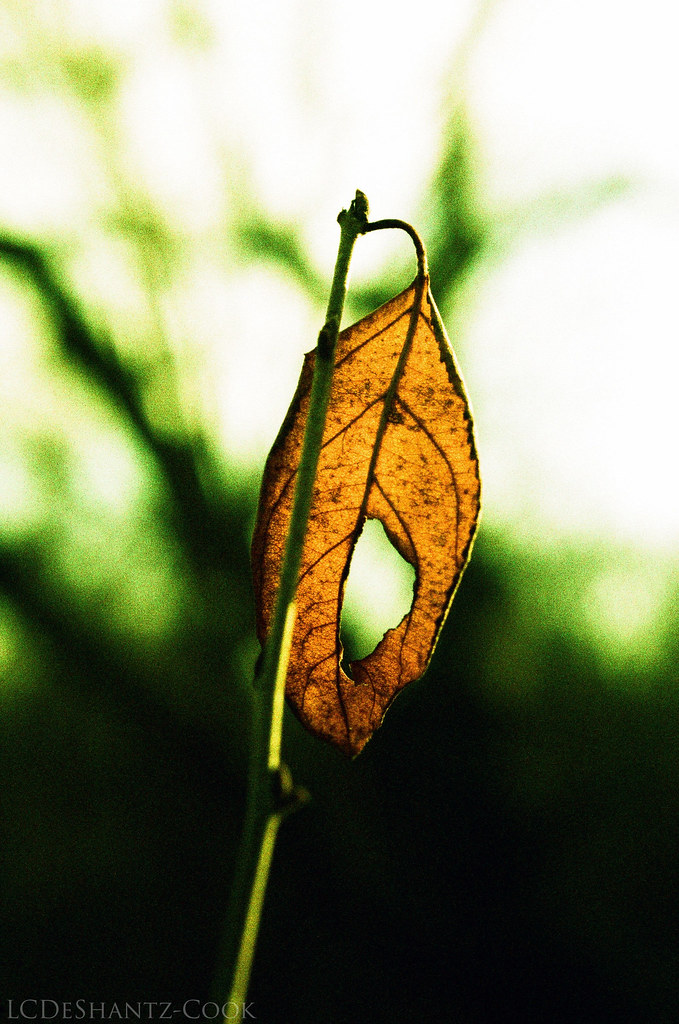 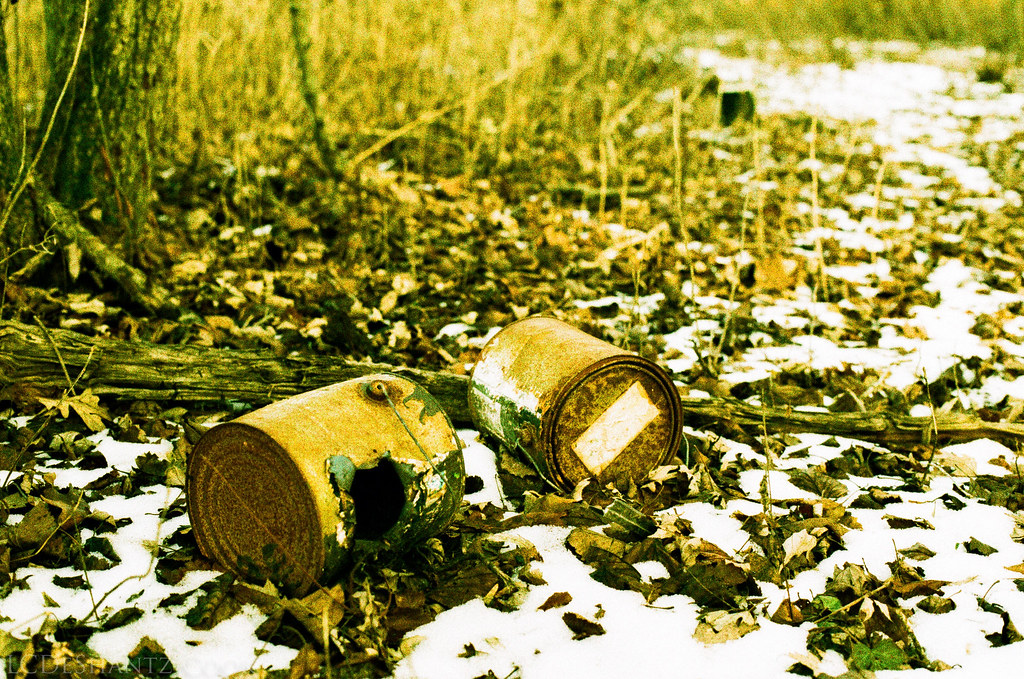 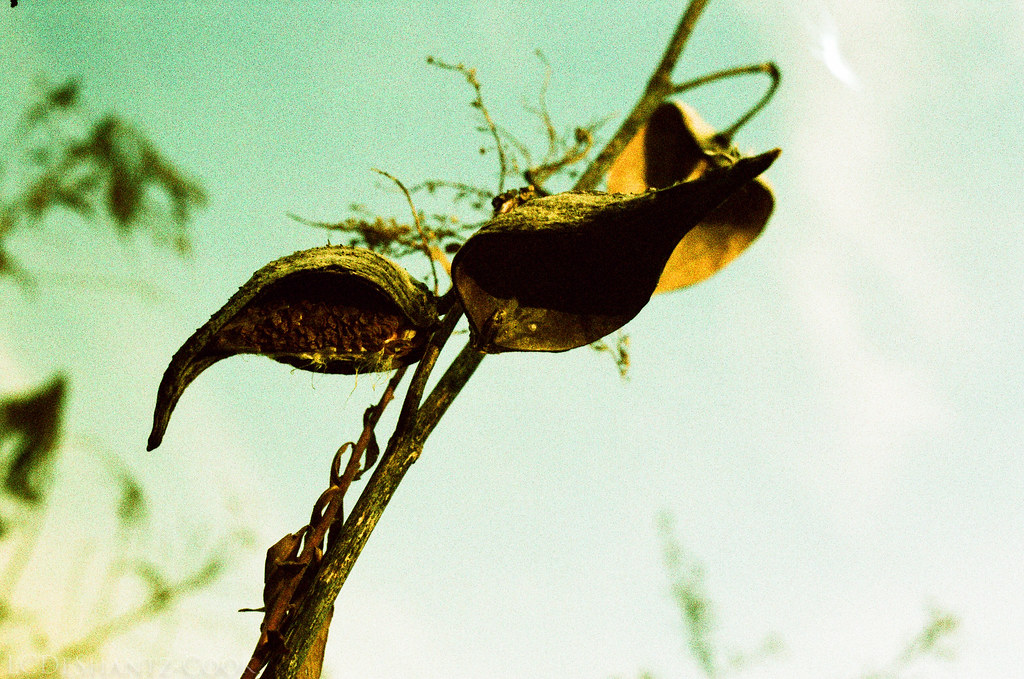 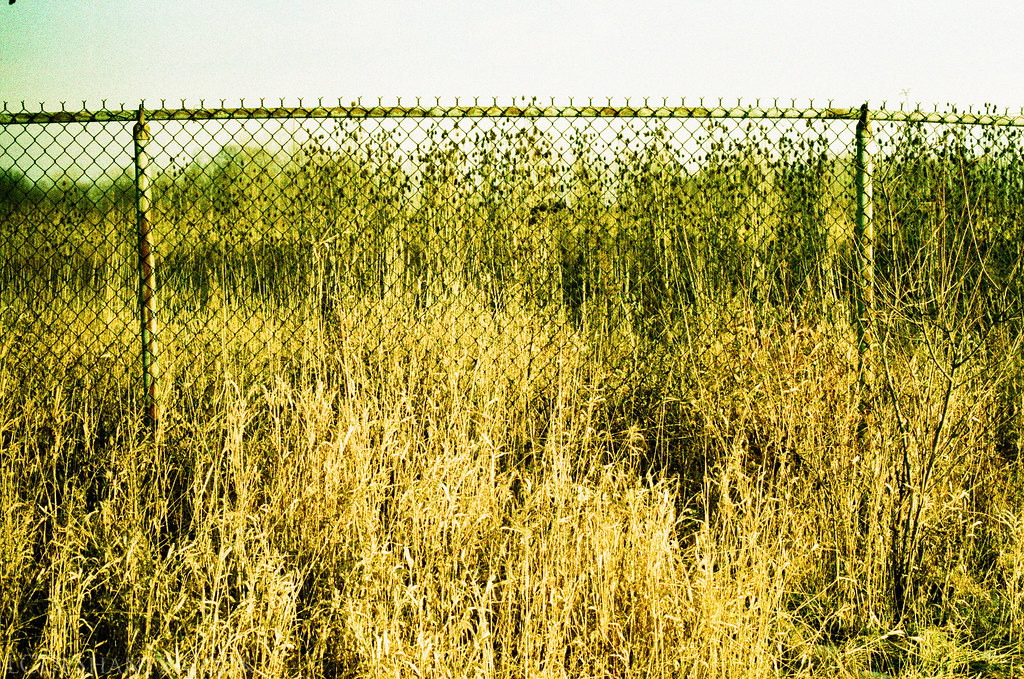 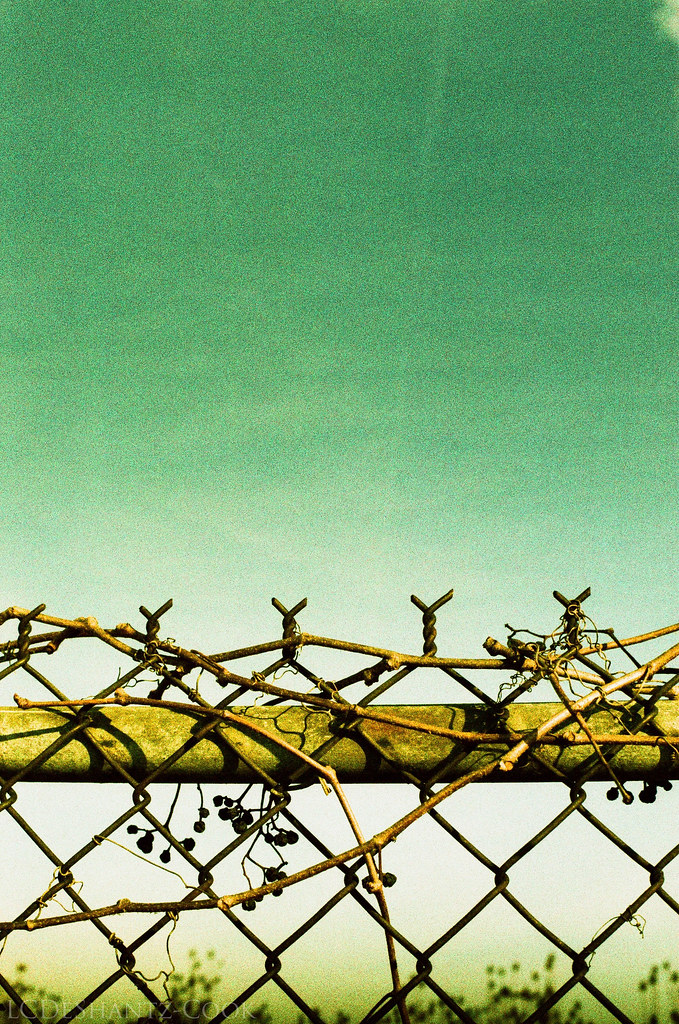 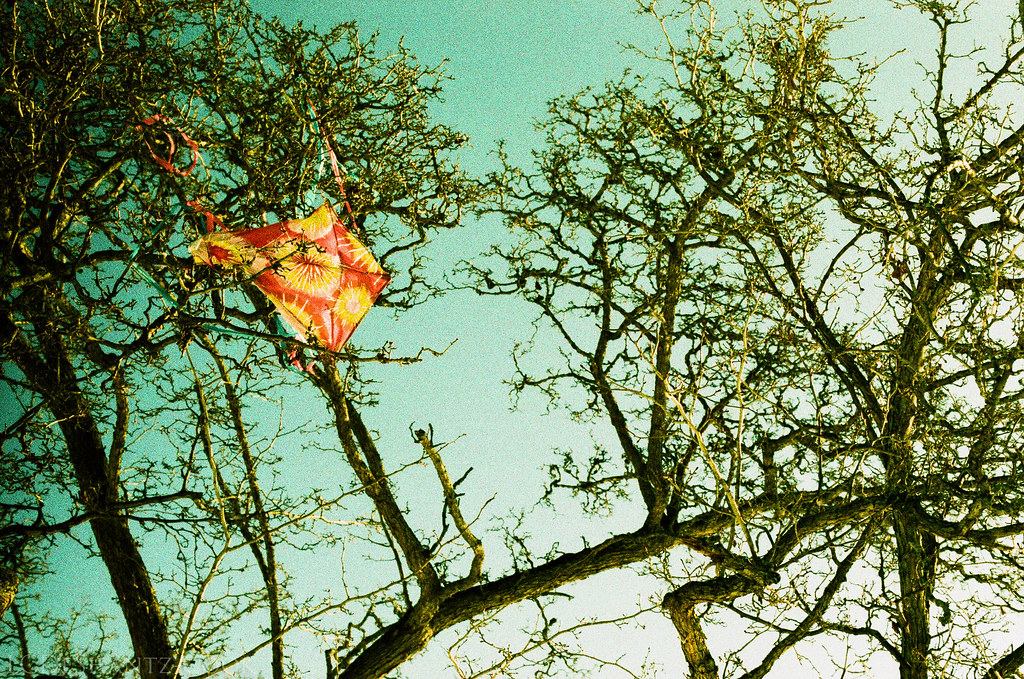 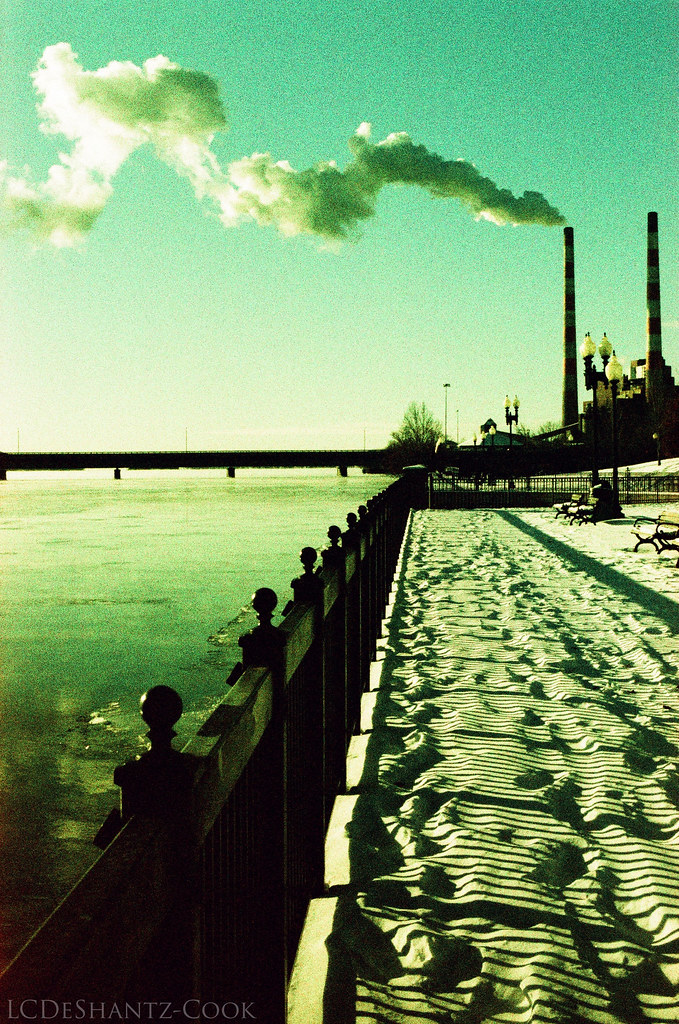 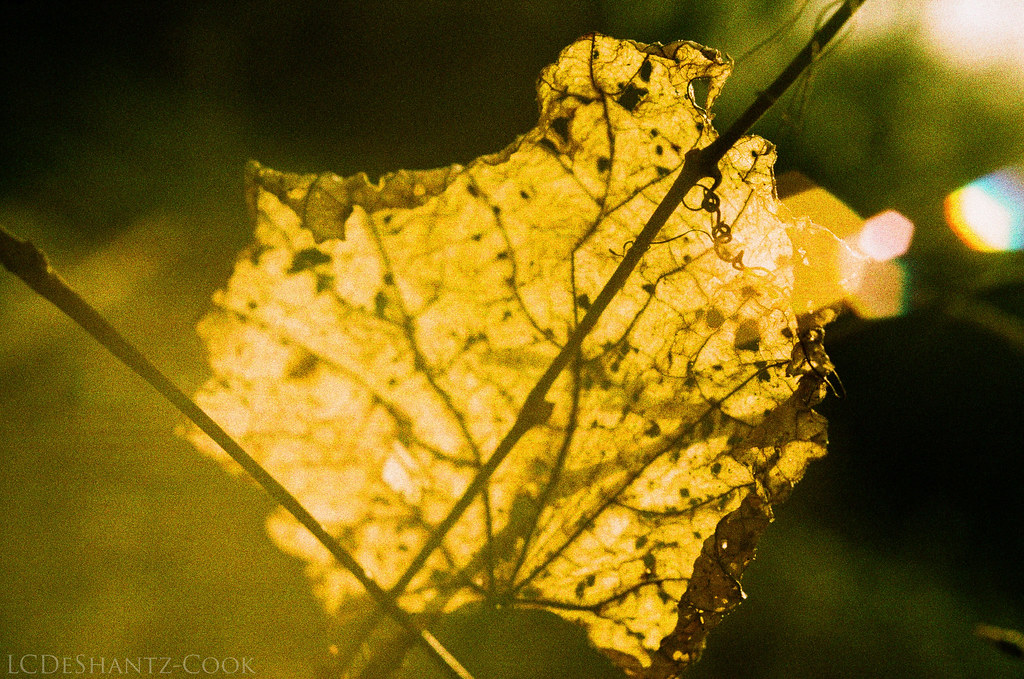 A running theme for photo shoots with Jane is that we always seem to find the mud. That day was no different–we drove to our favorite marsh and found plenty of mud to bring back on our boots.

I also had the Bronica SQ-A with me that day. Kodak Ektar is one of my favorite color films a) because it’s affordable and b) because it offers up rich, true colors. 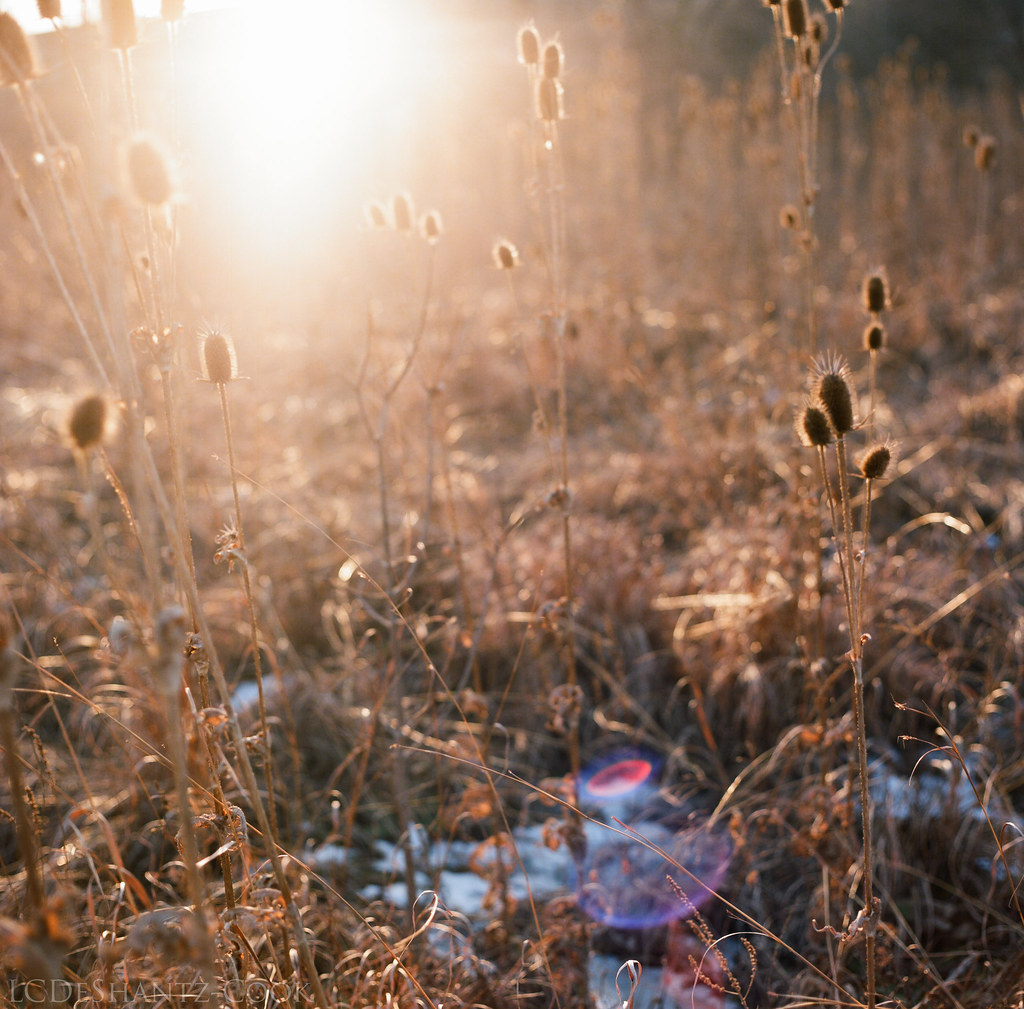 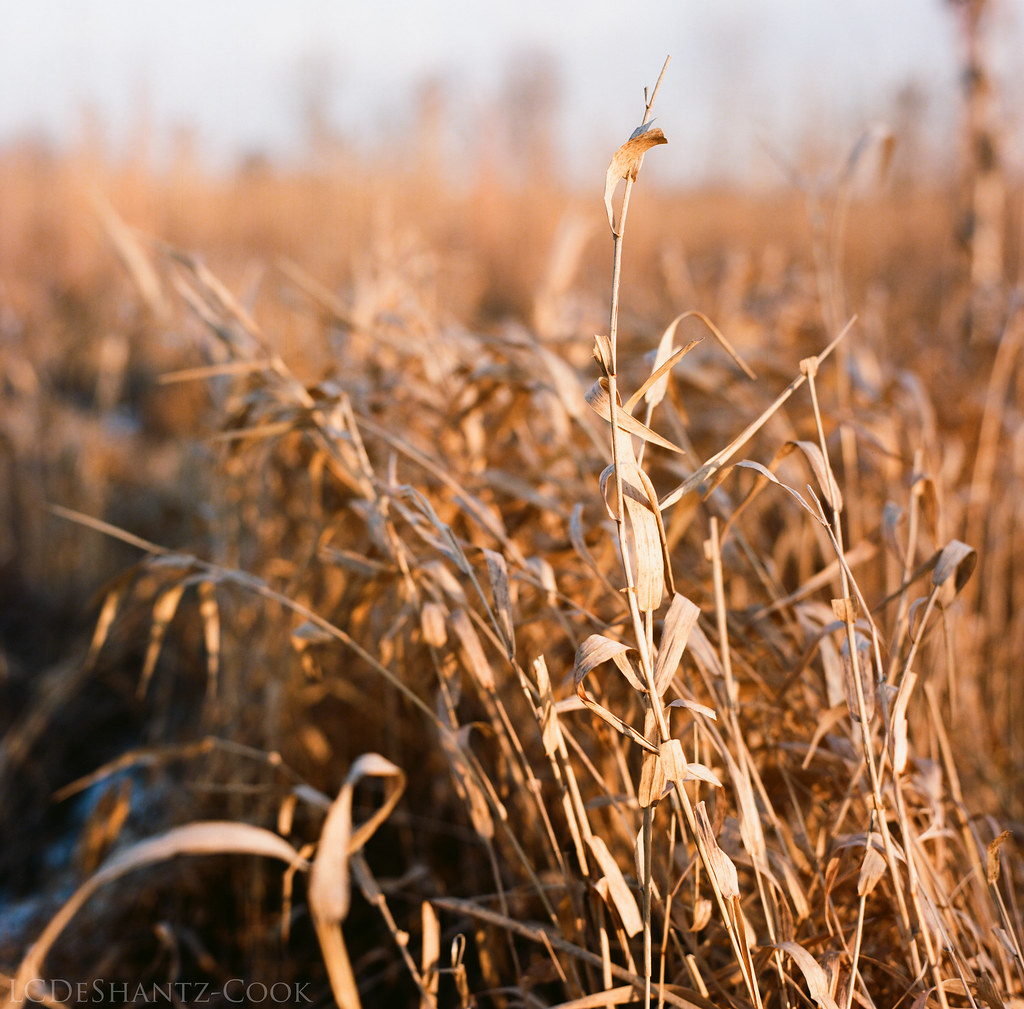 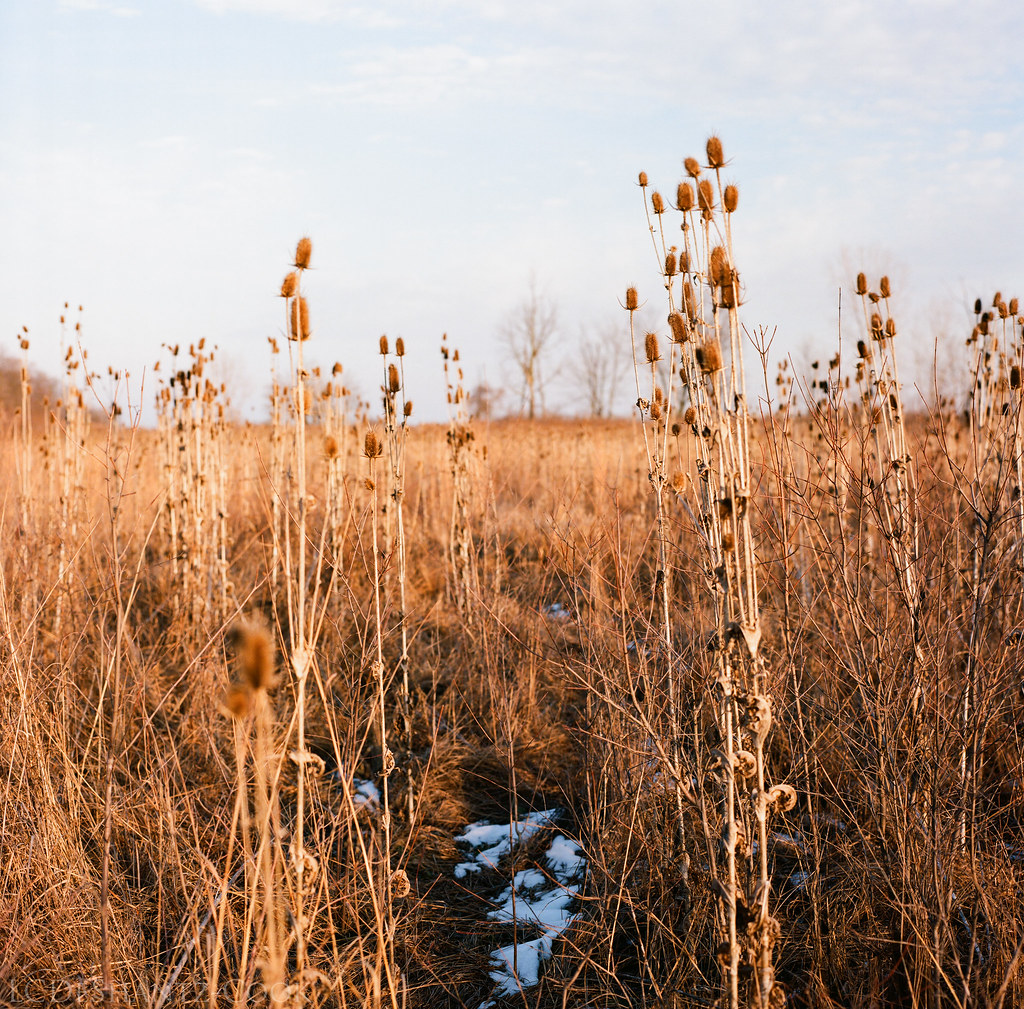 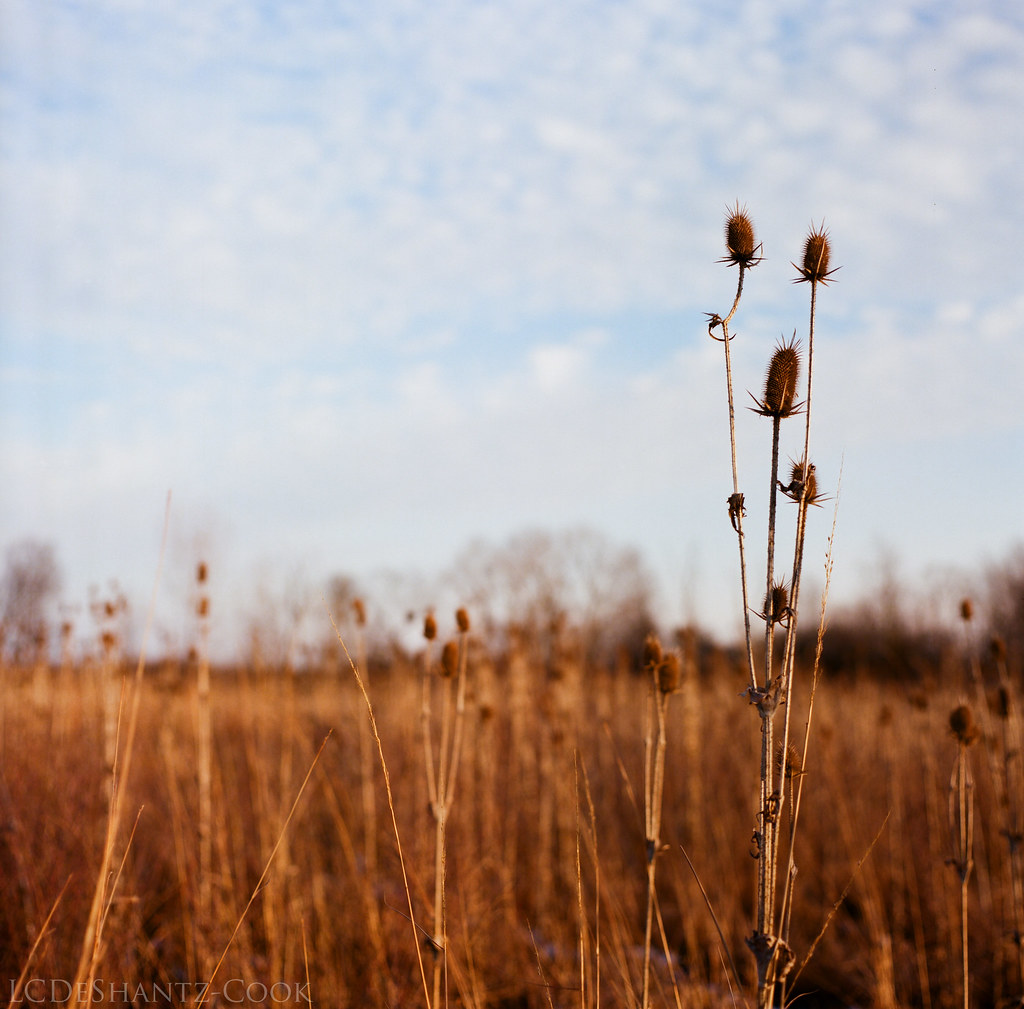 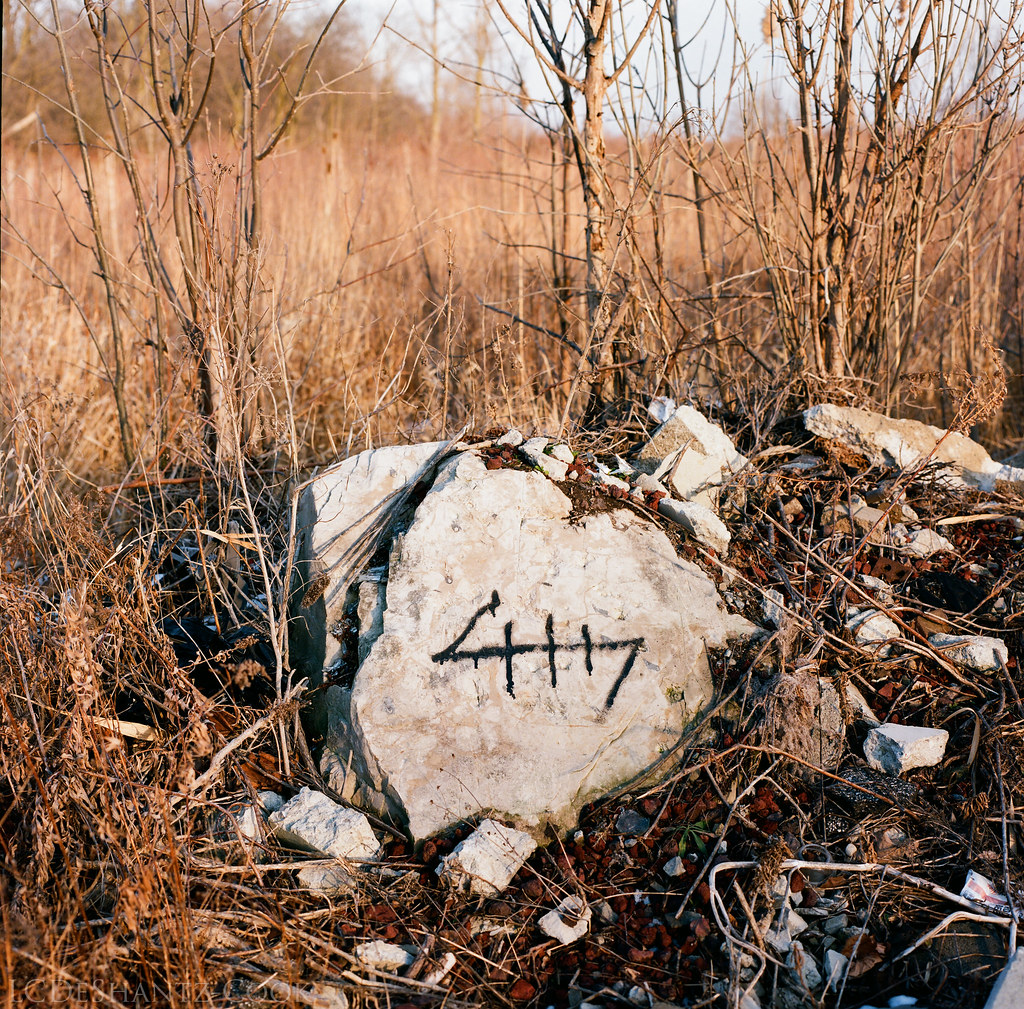 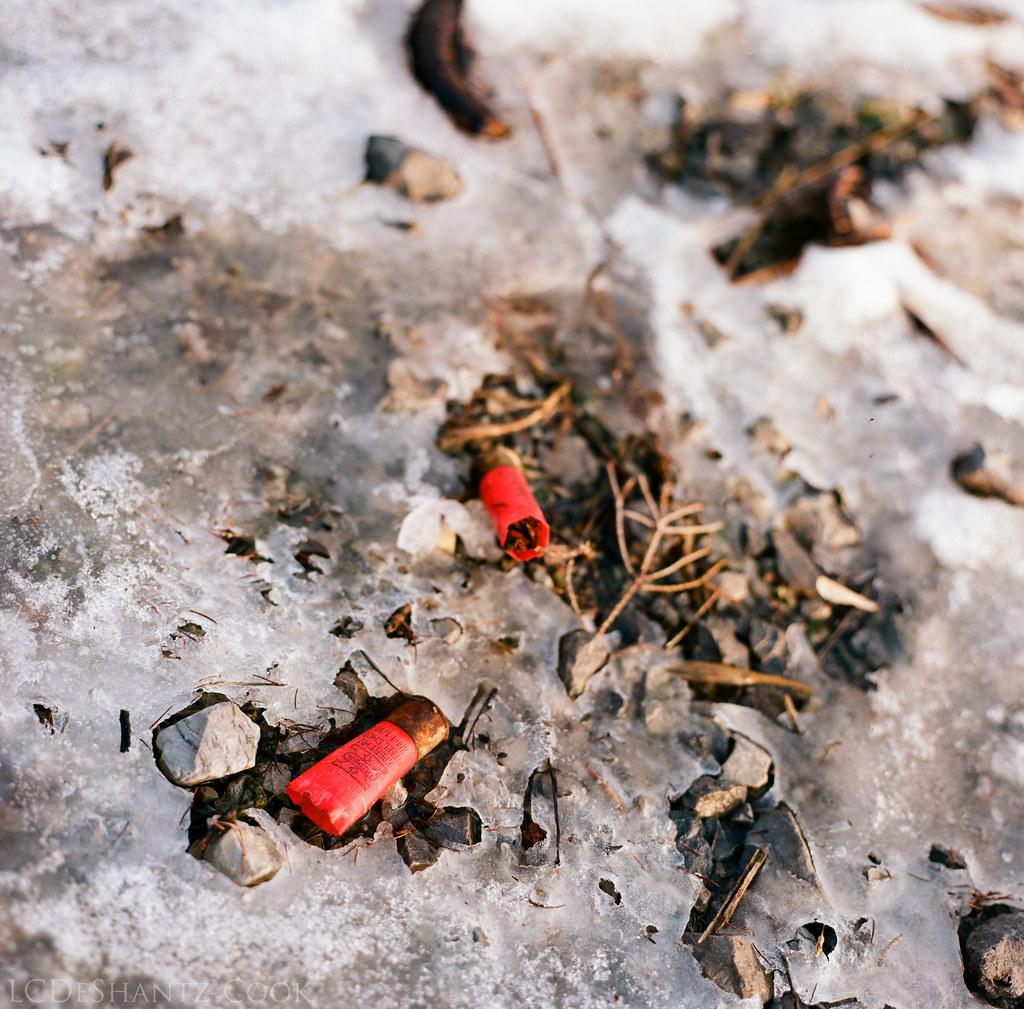 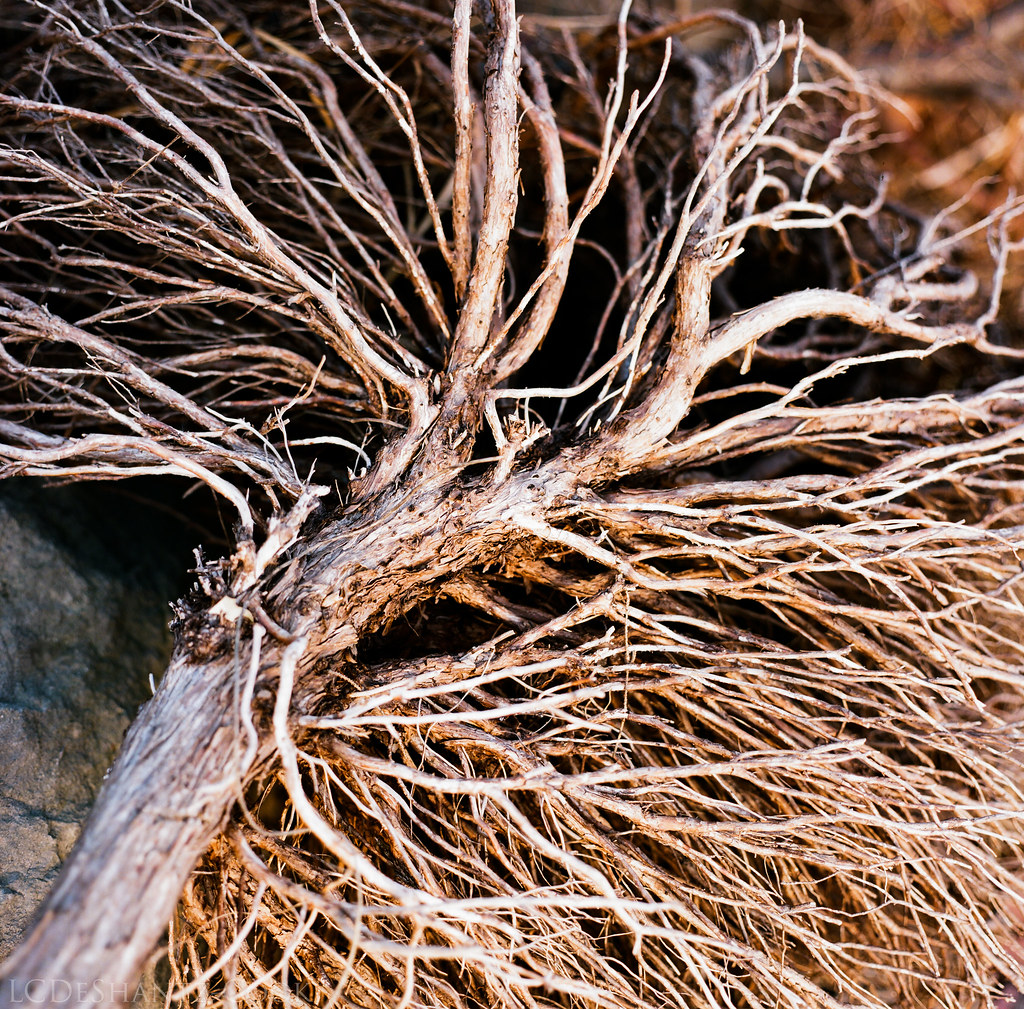 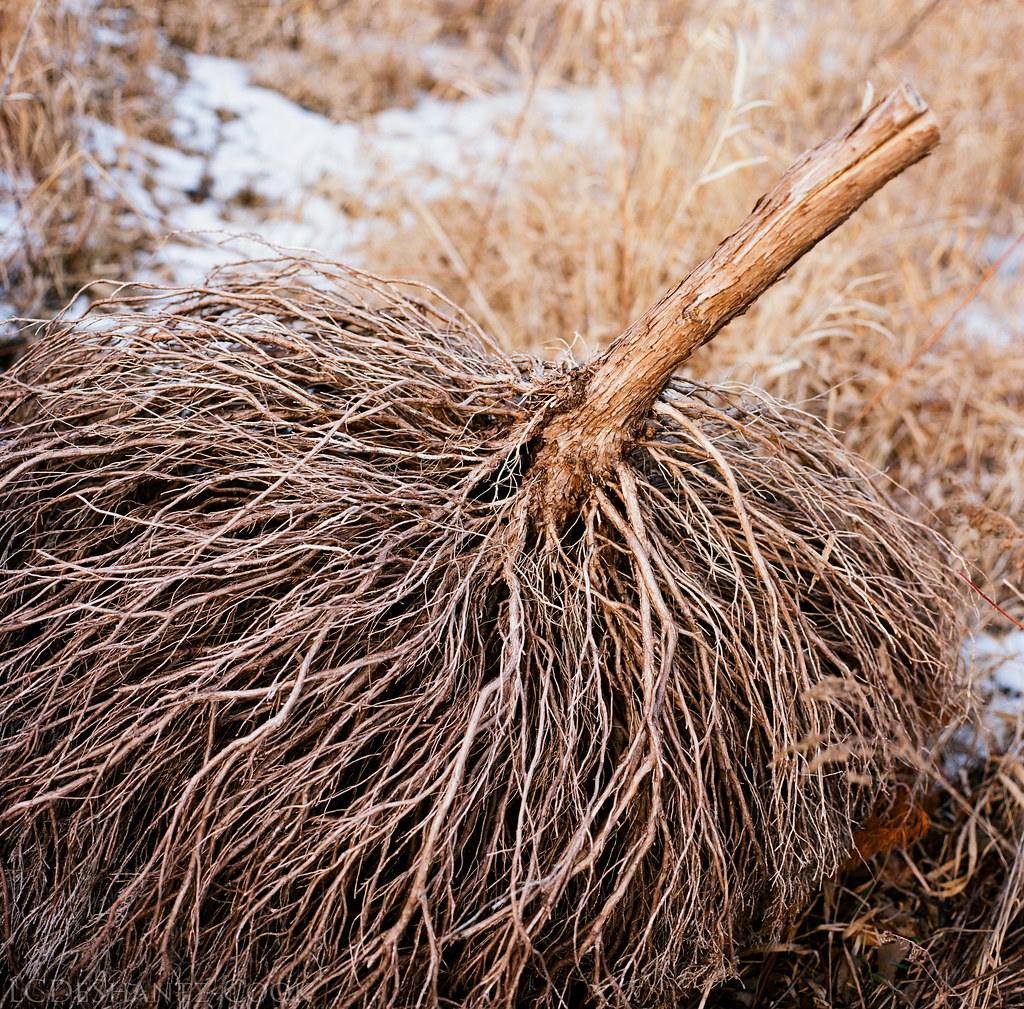 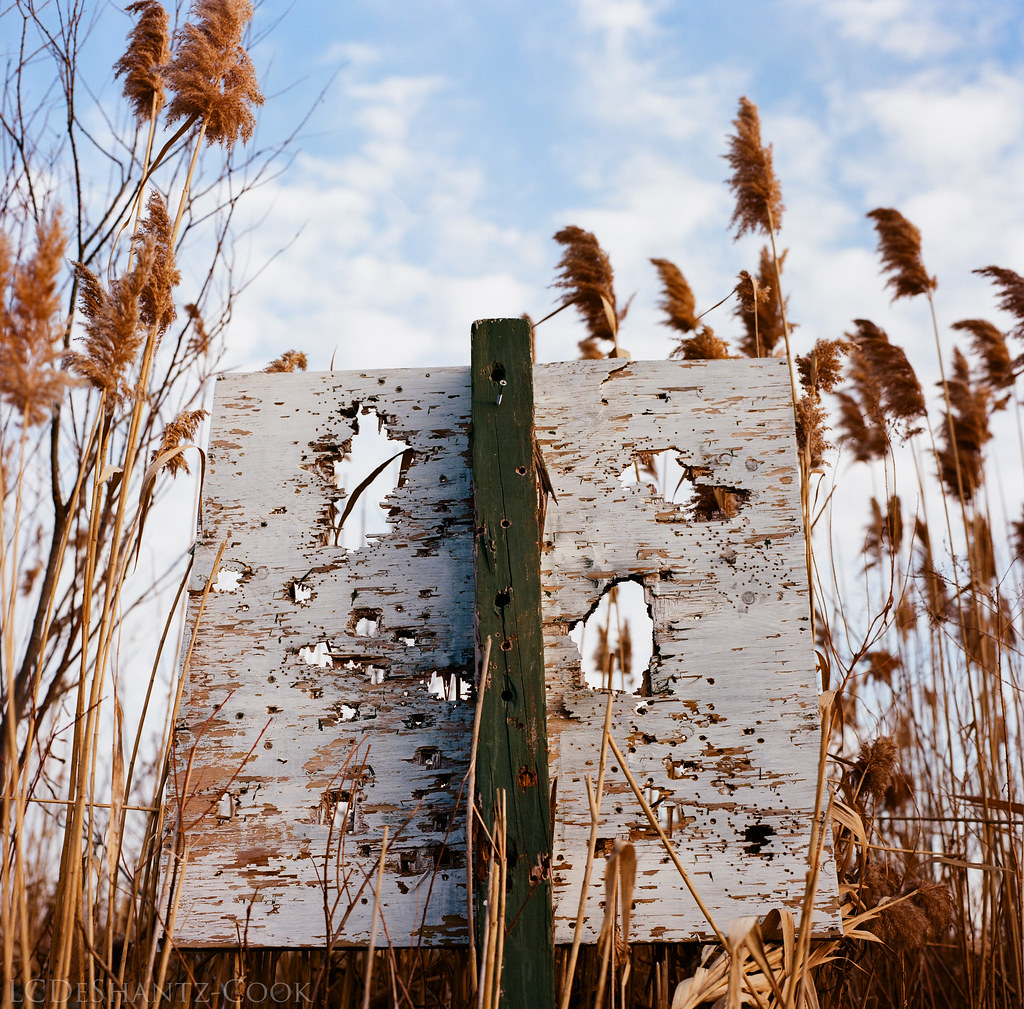 Sometimes I forget how lucky I am. I don’t write much about work here, but I have a pretty amazing job at a company that doesn’t scrimp on showing its employees that they are valued. More than that, though, it’s the people I work with. They make it all even better.

I spent a week in January at my company’s office in the San Francisco Bay, and while it was busy and I didn’t get to spend any time outside (my favorite thing) at least it was nice to have not only a change of scenery, but to be able to wear cute shoes and not ruin them because of snow and salt. I’m luckier still that my dear friend will be joining our team in just one week, and I will be flying again to California to help get her started.

I also think that it’s a luxury to have a job like this. I hear too many stories about people hating their job, their workplace, or their supervisors and tolerating those things, sometimes for decades, because they have to. I’ve either been lucky or I’ve played my cards right, but my career has been full of friends, mentors, and people I respect. I wish everyone had that.

Anyway, maybe because I was there three times last year, I’m starting to have dreams about California. It’s starting to feel more like home.

And I’m getting itchy for another non-work trip. I poked around a bit on Airbnb last night, dreaming of different skies. When I do that I feel like I’m half-here, half-somewhere else… one foot in my normal world. It’s a strange feeling, but not an unpleasant one.

But I also dream in pictures. And most of my pictures, or at least the ones I feel like I’m meant to be making, are here in Michigan and of the lake, the plants, the landscape I feel connected to.

These photos are from my first roll of film of 2018. It was snowing like mad and I left the cottage to wander into the meadow and woods with the Bronica SQ-A and a roll of Ilford FP4+. There are some odd lines on a few of these images and I’m not sure what might have caused them, but they are on the film and not just on the scans. I was more worried about correct exposure with all the white, but I either lucked out a bit or FP4+ is forgiving. Either way, I like my snowy shots and feel a little more comfortable shooting in the snow now, in terms of metering (it’s still challenging in terms of managing gear, snow on lenses, cold, and wetness!). 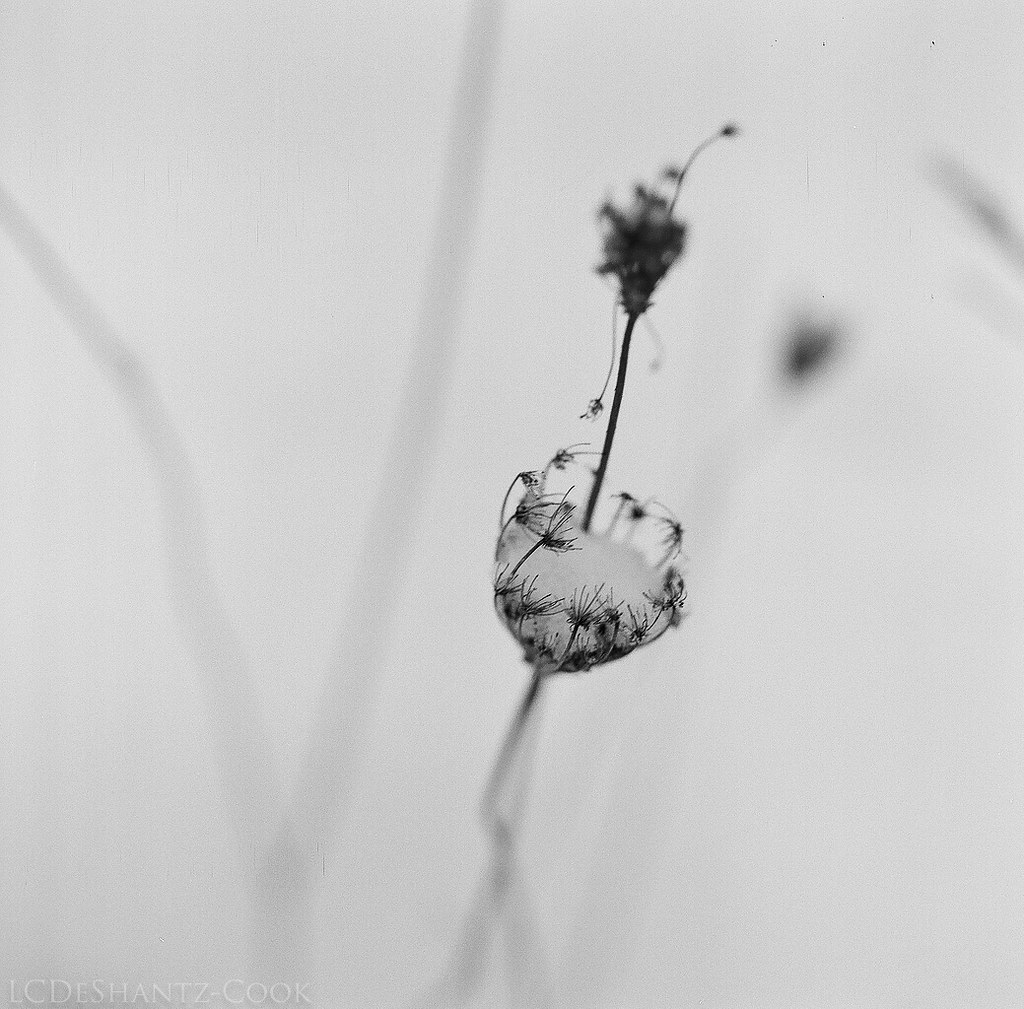 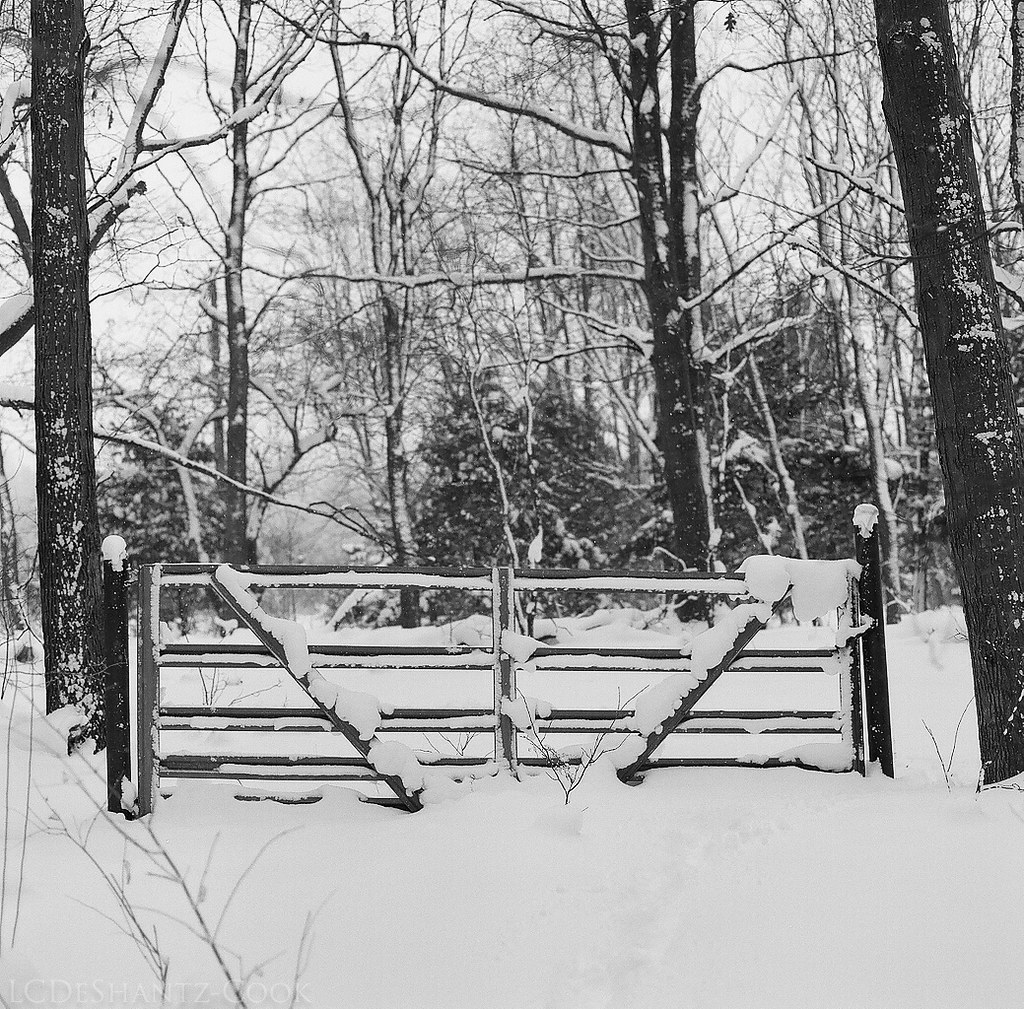 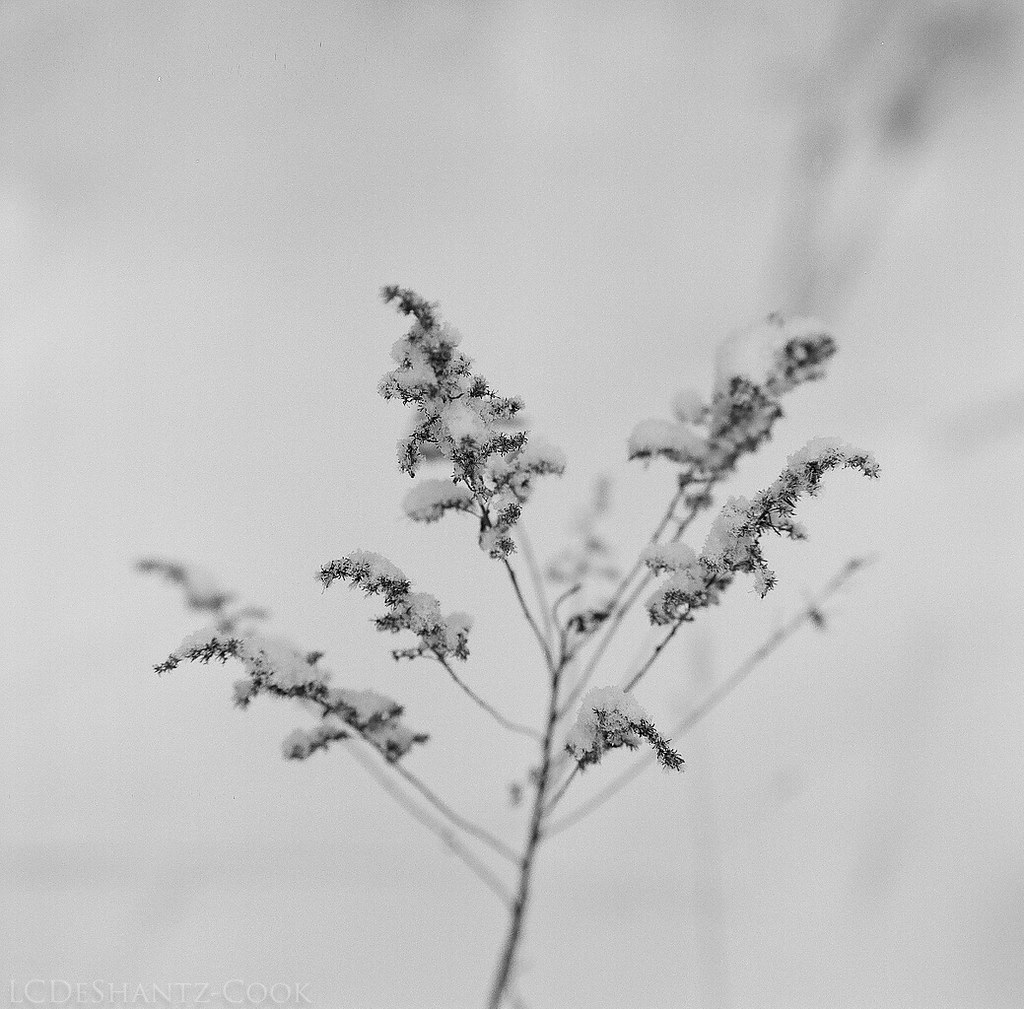 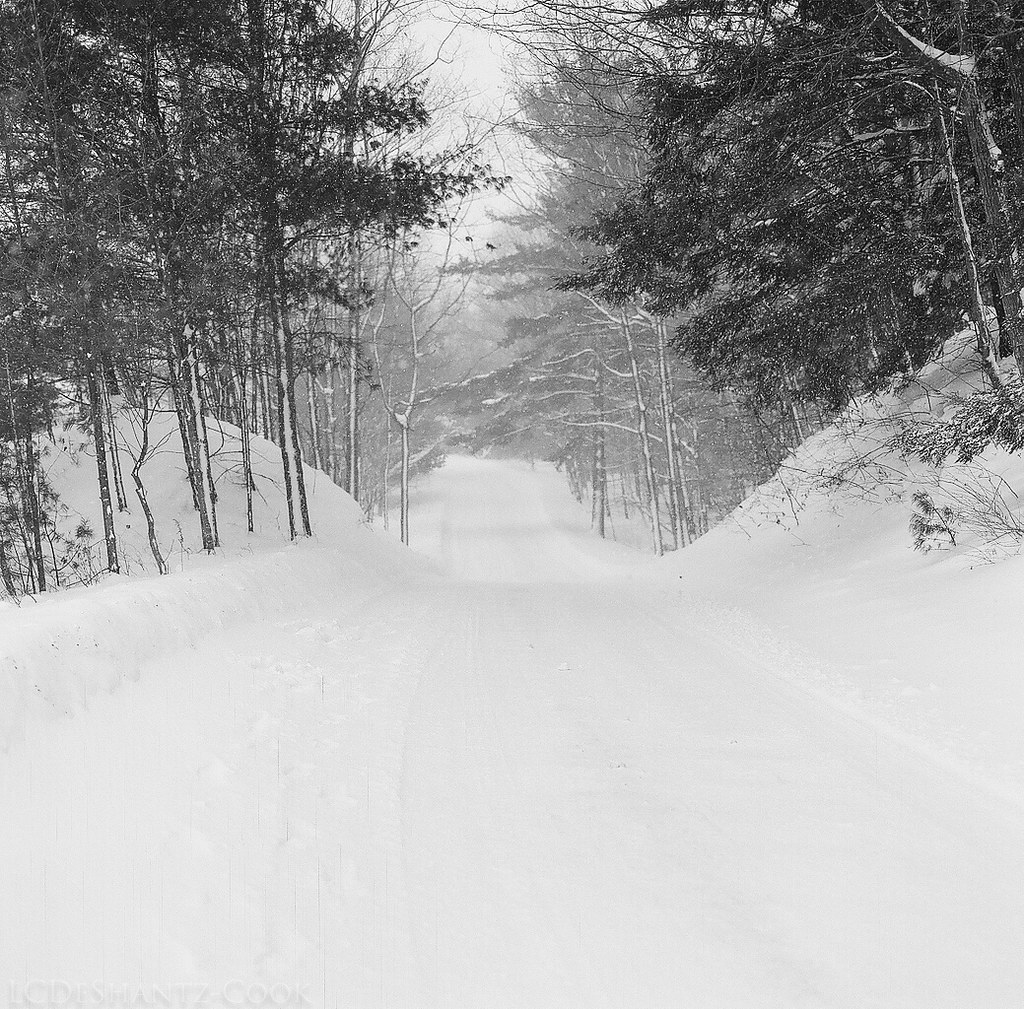 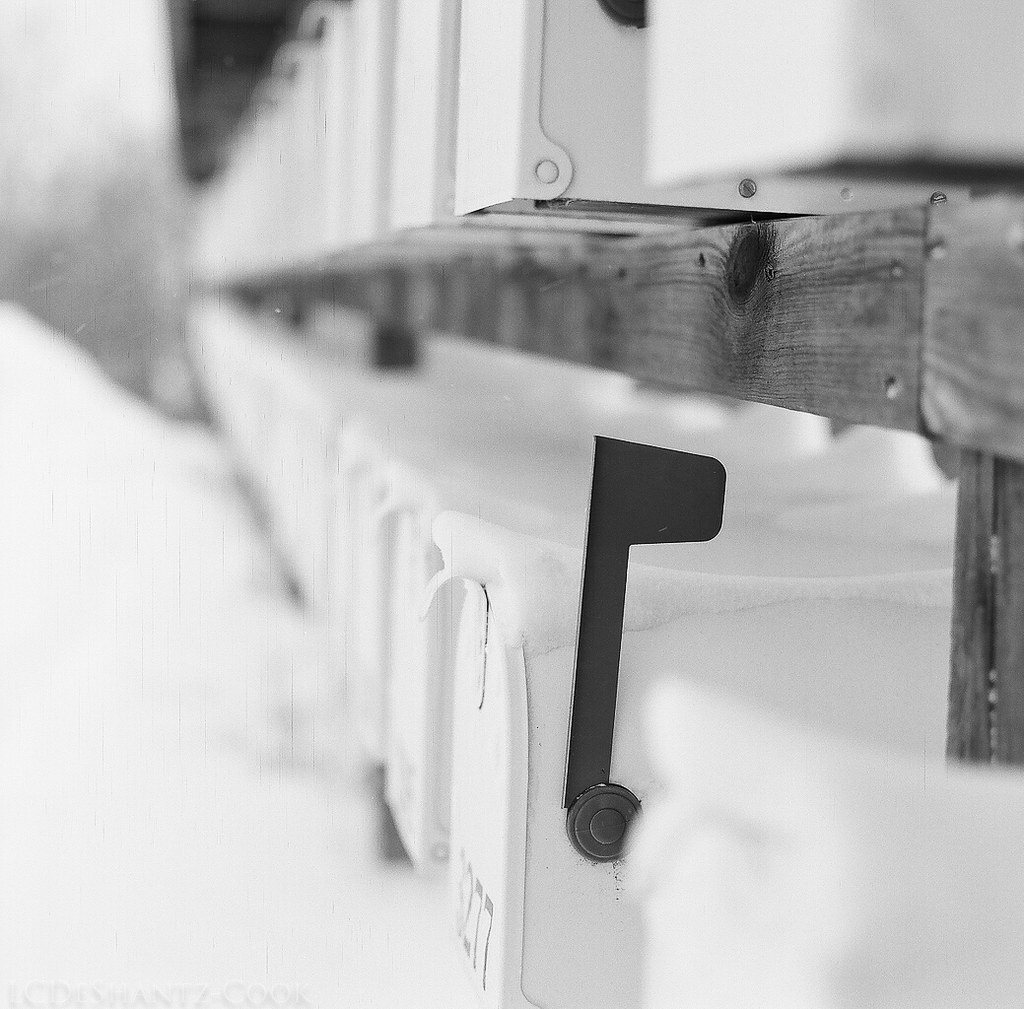 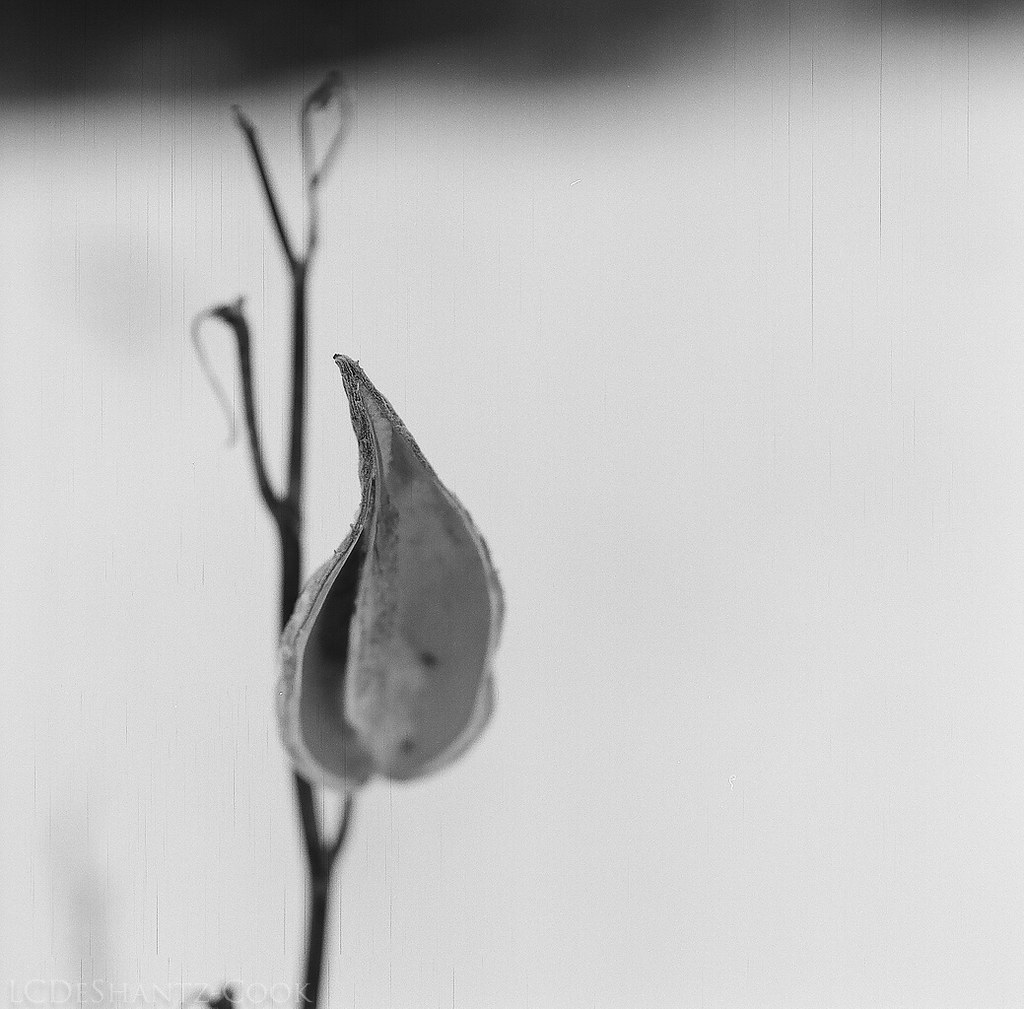