We wandered the music festival grounds last night. I feel honored to be able to do that, through knowing some lovely and talented people that make it possible for us to experience the festival without having to be actual festival-goers. It’s in a pine forest, lit up with light and art and hope and pure escapism. It’s a surreal landscape.

I took my camera to the meadow just under two weeks ago to photograph this goatsbeard, and the next day as I walked by it the meadow was being mowed. All the goatsbeard, the milkweed, the sweet pea and clover and everything else that was erupting or about to be erupting was gone. There’s more right behind it, but it still made me sad. I don’t like the tearing down of anything, I guess.

Last week the weather on Lake Michigan was a little too spectacular for early June. Summery, hot, beach weather mostly, with little wind and a bug population that hasn’t gotten out of control (yet).

My friend and co-worker came to the lake to stay and work for the week, and we set up shop at the dining room table and made the most of the lovely view, working when we needed to and breaking when the outdoors beckoned. I’m used to being alone here, but it was nice to have a reprieve from the quiet, especially after work. We had plans to have dinner out one night, maybe a lunch, too, but it was just too nice to bother to leave the beach. So we didn’t.

One evening, the fog rolled in and stuck throughout the night. I left windows and doors open because it was warm enough for it, and was awakened at 4 a.m. to the sound of a freighter’s foghorn, steady and gutteral, in the otherwise still night. Soon after, another foghorn in a slightly higher tone; a duet of call and response. There was no picture to take, so I wrote a haiku.

These are the things that make my heart swell. The night sounds, the morning dew, the sunset colors, the ever-changing lake.

Today the power went out and I couldn’t work for almost two hours. A minor annoyance; an enforced break to walk the beach. A neighbor’s generator hummed, but otherwise there was quiet aside from the birds and the bees, which seem busier this year than ever.

I’m thinking a lot about what there is happening when I have a camera in hand. Sounds, mainly, or a mood or feeling in the surroundings. Last evening I shot of roll of 120 film in the meadow, mainly of the seeded goat’s-beard puffballs dotting a small section of the meadow near the road (these look like giant dandelions that have gone to seed). The goat’s-beard shared space with other grasses and some rich purple sweet pea. It was another windless night; gray and dull skies, warm and a bit muggy, sweet-smelling and earthy. I could hear an occasional low growl of thunder from a storm out over the lake, but louder than that were the bees–near hummingbird sized bumblebees, working around me, a din of their buzzing. I added to my mosquito bite collection, getting fresh bites on my hands as I worked. One of the resident eagles soared overhead and disappeared.

I took notes so I would remember these things–the things that you wouldn’t know by looking at one of the pictures from this roll. The things I might not otherwise remember when this film is developed in a week or two.

This is what I want to explore. Can I impart the sounds, or a smell, or my heart bursting, or the pinch of a mosquito bite? Can I infuse these other-sense things into an image?

I promise, this is a freighter. 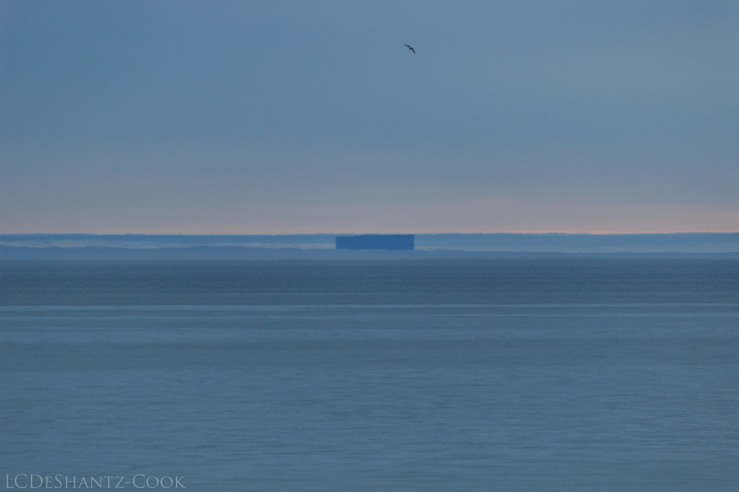 It looks as weird in the photo as it did in real life; two nights ago, a rectangular block floating in front of the horizon, accompanied by a familiar low hum that drifted across the quiet, windless lake from the freighter’s motor. More mirages, or optical illusions, from the cold lake and the warming air.

A few weeks ago, after we moved our daughter to Texas but before she stayed there for good (in other words, she came back to town for a bit) we came to the cottage just in time to see the blossoms on the fruit trees.

The west side of Michigan grows cherries, peaches and apples (in that seasonal order, too). Also pears, but the first three are the big ones. Aside from tree fruit, the area is also big on asparagus, strawberries and blueberries.

But back to the blossoms. They’re so pretty, and I wish I could tell you I knew from the blossoms which fruit trees I am looking at, but alas, I don’t–unless I remember what was growing in the orchard in the year past. I do know that I like to (very lightly) trespass on the edges of my neighbor’s orchards long enough to get some photos of these trees at blossom time and then again when the fruit is in season. I really hope they don’t mind.

Actually I’m pretty sure these first three photos are of apple trees.

Aside from enjoying the blossoms, we plucked some spruce tips and tried to make a spruce tip syrup. I was excited after reading about spruce tip syrup last year, too late to pluck the spring tips, but my execution may not have been right. I might try again before all the spruce and pine tips have gone and turned into needles. You’ve got to get them when they’re tender and green.