I put a roll of poorly stored, expired (2006, I think?) Fujichrome (Sensia, I think?) film in my Minolta SRT-102 last week and shot it in the garden at Cherry Point Market, then mailed it to the lab and asked them to cross-process it. I wasn’t expecting much (see “poorly stored” and note my lack of actual attention to the film details).

Uh, I don’t know what happened here. Every image is either this crazy pink/purple or red. I don’t have the negatives back so I can’t tell if they really look like this or if the lab maybe had the settings wrong on the scanner, but these are the scans they sent me and I’m totally digging whatever it is that is happening here.

This sort of result is not for the perfectionist, I know. But I’m no perfectionist. I’m messy, bad at a lot of things, experimental, and I’m done censoring myself. I’m going to make crappy art. I’m going to explore. I’m not apologizing.

(Wait. I apologize if this post hurts your eyeballs. But that’s all I’m apologizing for.)

and other pointless observations

I don’t have a picture of my hair in Texas. I’m not much for selfies, and no one is clamoring to snap any photos of me. But, I was in Austin spending time with my daughter and soaking up the muggy heat and ignoring my own life for just a few days and I gotta say, my hair looked poofy and full and not flat and static-y and I just liked it.

My hip flexor, which I tore and wrote about last post (in March, no less–I’m trying not to ignore this blog but it seems that’s what I’ve done) is 95% better. Sometimes I feel it a little but I’m not babying it anymore. The black and white film class I took at community college just finished a week ago today. I’ve got a bunch of negatives to scan and I’m not thrilled for that because I can’t seem to make a decent scan come out of my scanner. Plus, scanning is a royal pain in the ass.

The cottage window is fixed and the house survived the winter; the beach did not. The bluff in front of our cottage is in ruins, disarray; the pipes and tires we drove into the shoreline as protective jetties more than 30 years ago are now exposed, our stairs no longer usable, a high cliff from the bluff to the water. We know how it goes, but it still stings and it still gives me nightmares. We can only hope for the levels of the Great Lakes to go down, but I’d prefer to plan than leave things to hope or chance. I want to know what’s next, even if I’m not going to like it. I do better with that.

Still, it’s not like the cottage is about to fall off the bluff and into the lake (I don’t say this jokingly as there are cottages on these lakes that have done just that). We’re not in danger yet. The view is still spectacular, the wildflowers and the deer and the foxes and the eagles will still make appearances, the sun will still rise and set and make for appreciative conversation. Summer warmth will kiss our bare skin and make us feel better about the world.

We went to a park in an Austin suburb and walked a trail there that wound through scrub and cacti and wildflowers and it was hot and sunny and wonderful. The leaves had only just unfurled here in Michigan and the earliest spring flowers are in bloom, but in Texas it was lush and green and fields of yellow and red and orange wildflowers were riotous and plentiful. Anyway, I shot a roll of film mostly in that park with the last few shots around my daughter’s neighborhood and on the rooftop deck of her apartment building.

The film is Lomography 100 ISO color film. The thai basil drinking vinegar I soaked it in a few months ago offered a pretty subtle effect, with no great streaks or bubbles of color, but some gentle color shifts mainly. I’m good with it.

Until next time, Texas. I might not come ’round in the summer because, well, you’re really hot, and I don’t mean that in a nice way. But you’ve grown on me, and I like to see my kid, so keep some beer in the cooler for me, will ya? 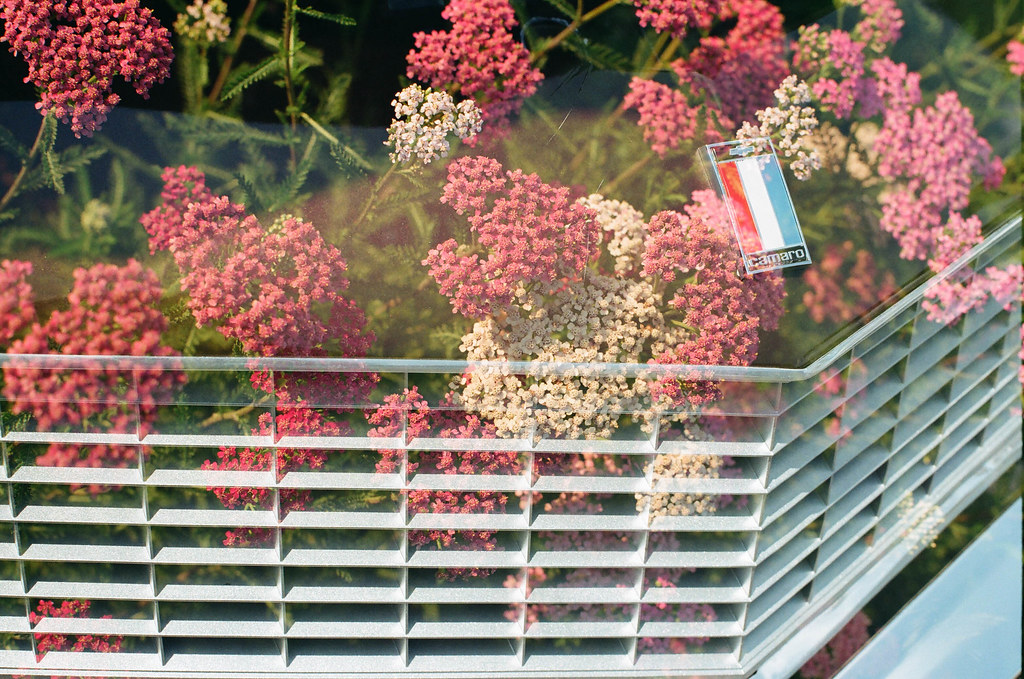 A few weeks ago I wrote about a film photography “walking workshop” that I went to in Ohio. A week before that I’d shot a roll of film, mostly of the flowering plants in a garden I like to frequent in west Michigan, plus some wildflowers and a few sunsets. I finished the final shots of the roll in my backyard of the flowering plants there, on the east side of Michigan, and then re-shot the roll at a car show and in Findlay, Ohio’s downtown during the workshop.

I just really, really like a lot of these. I used my trusty Minolta SRT-102 and Kodak ColorPlus 200 ISO film. 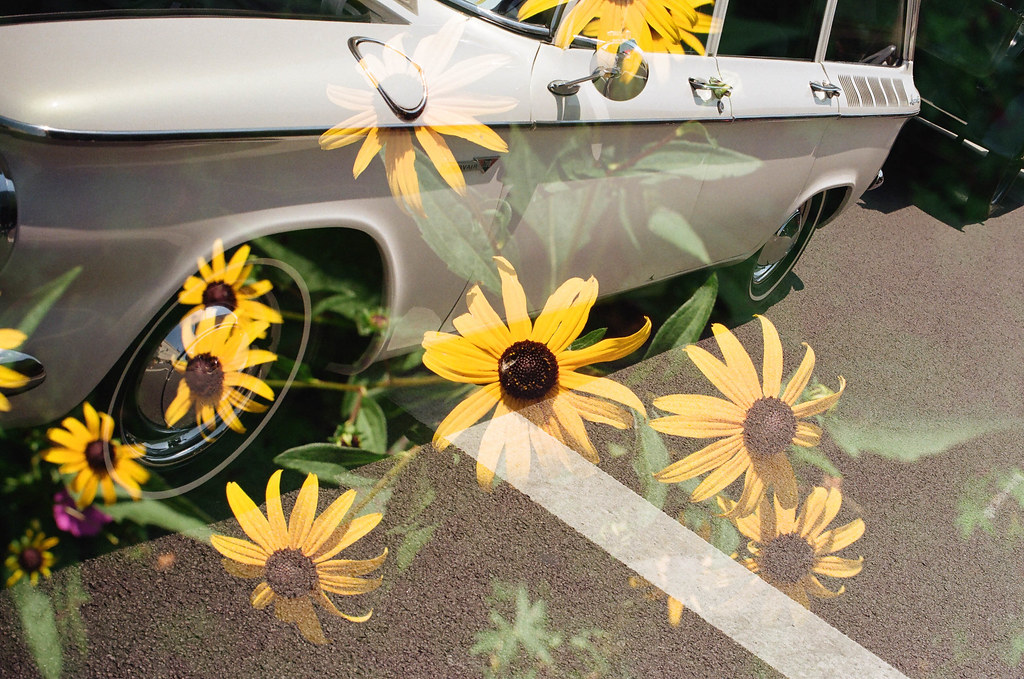 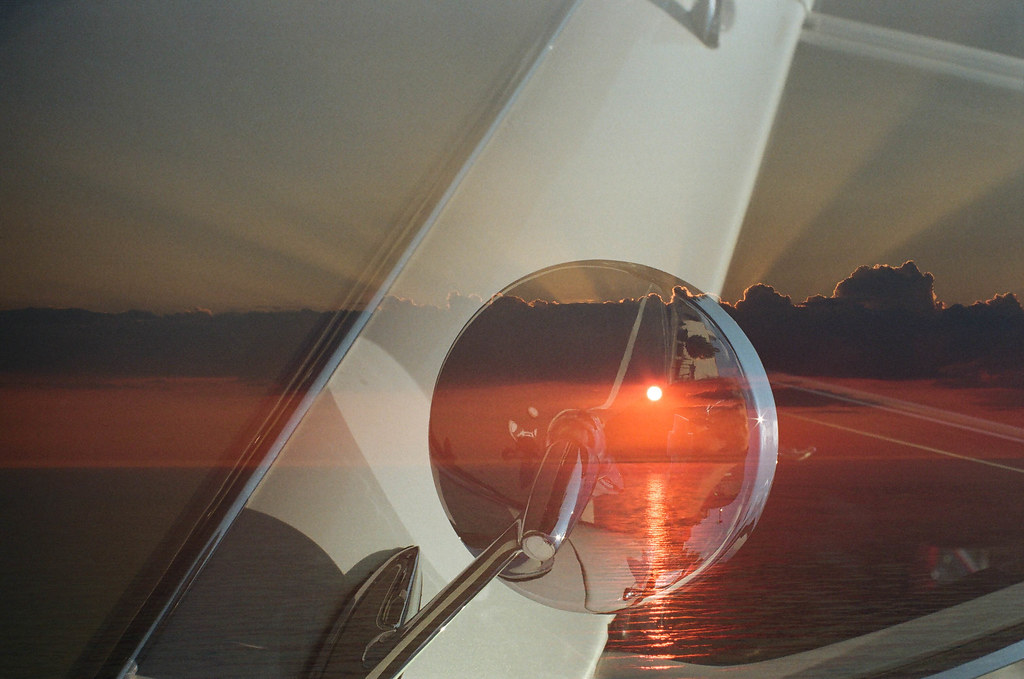 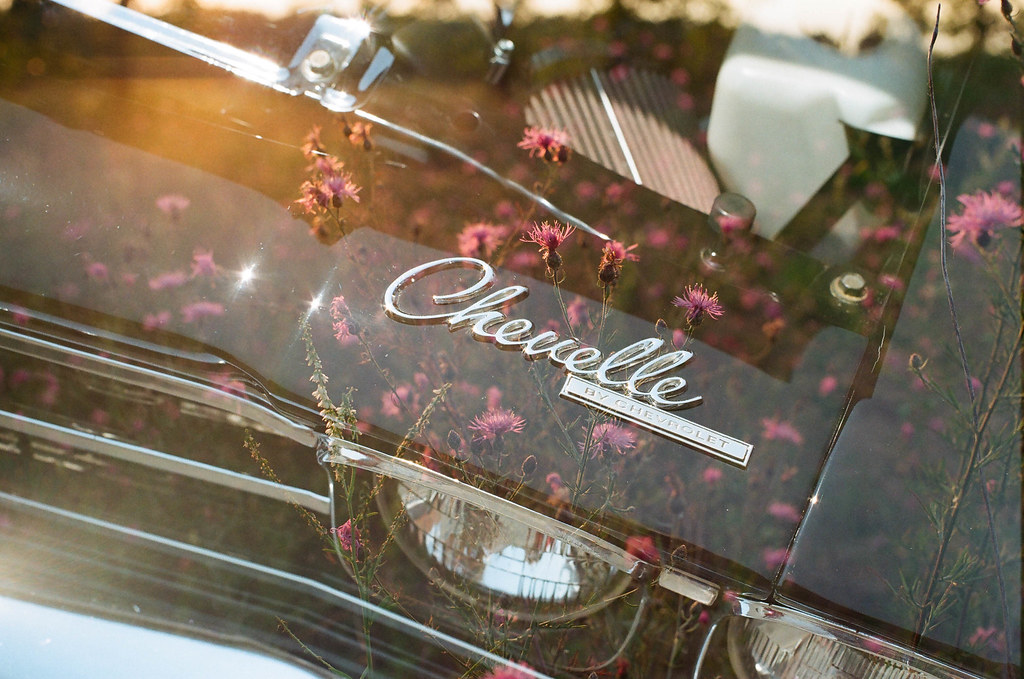 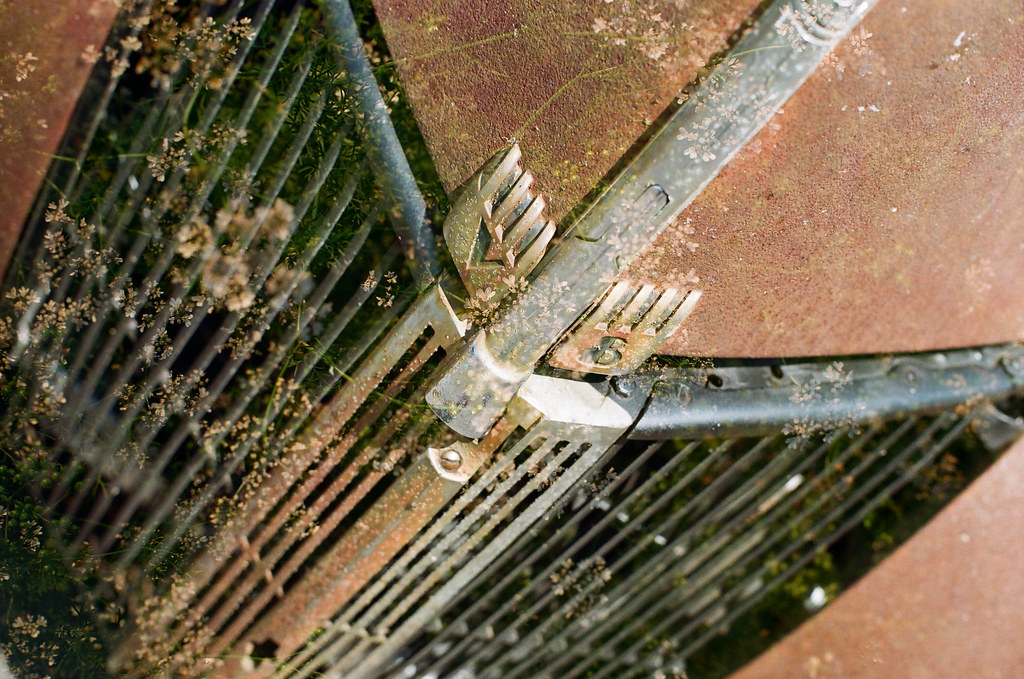 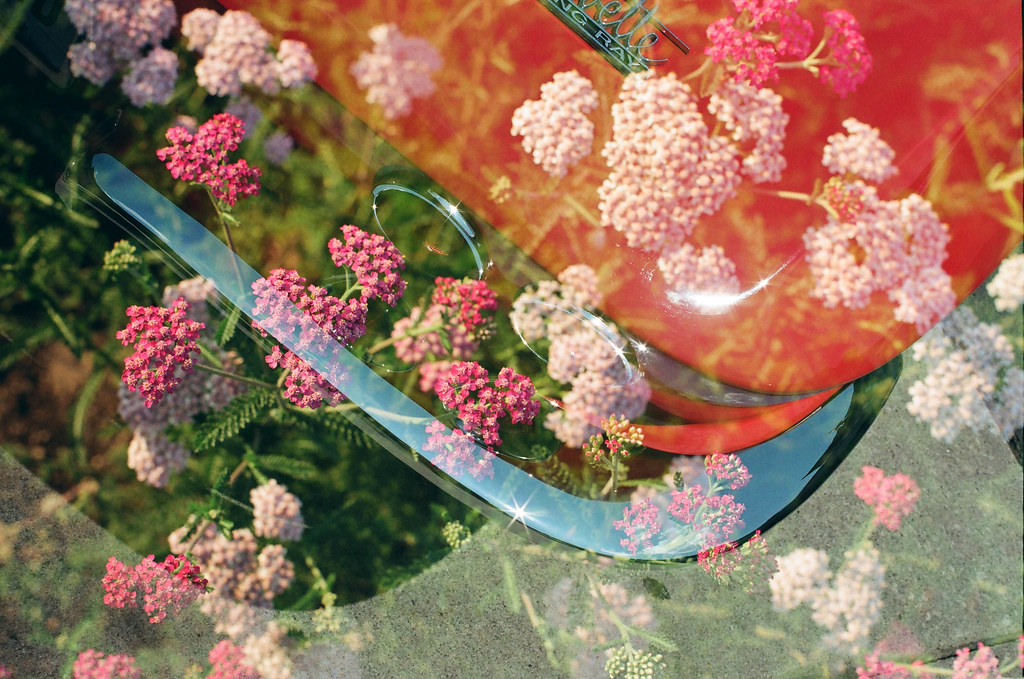 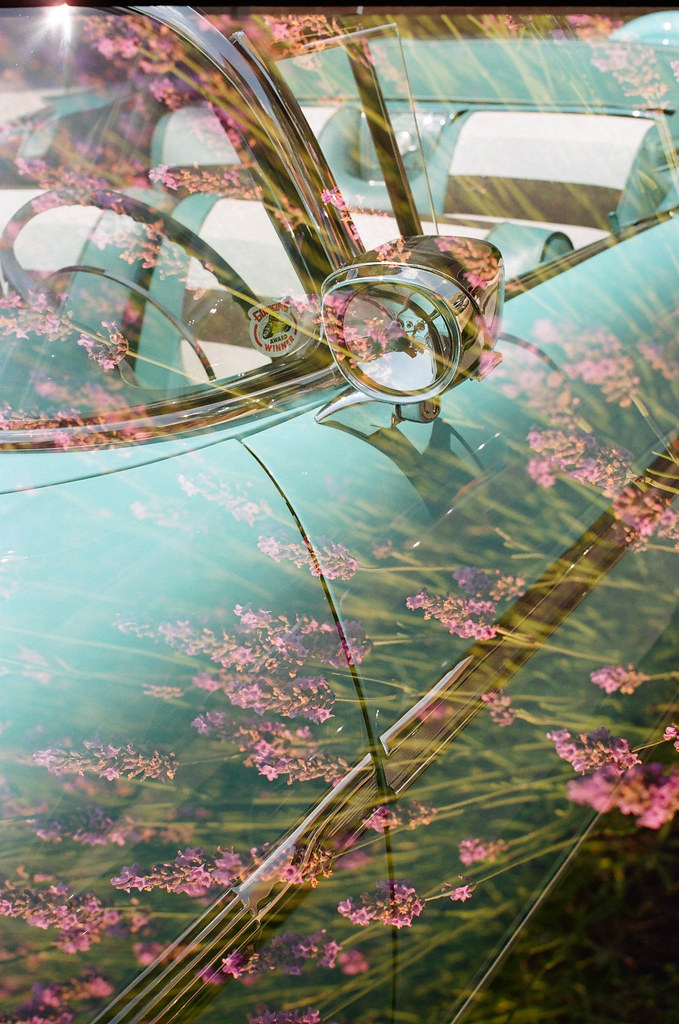 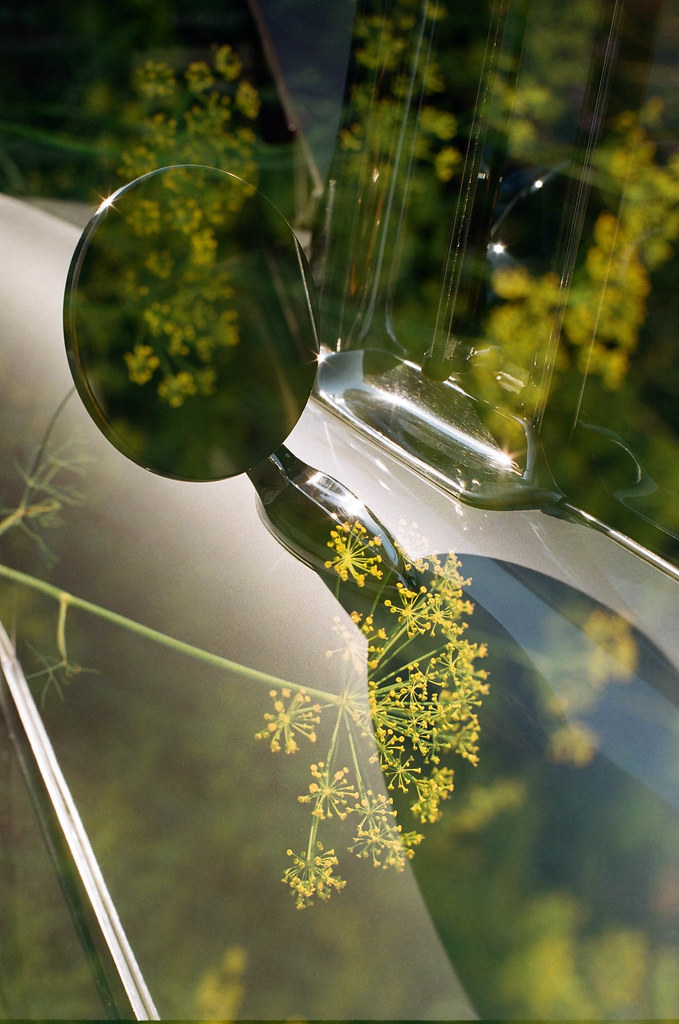 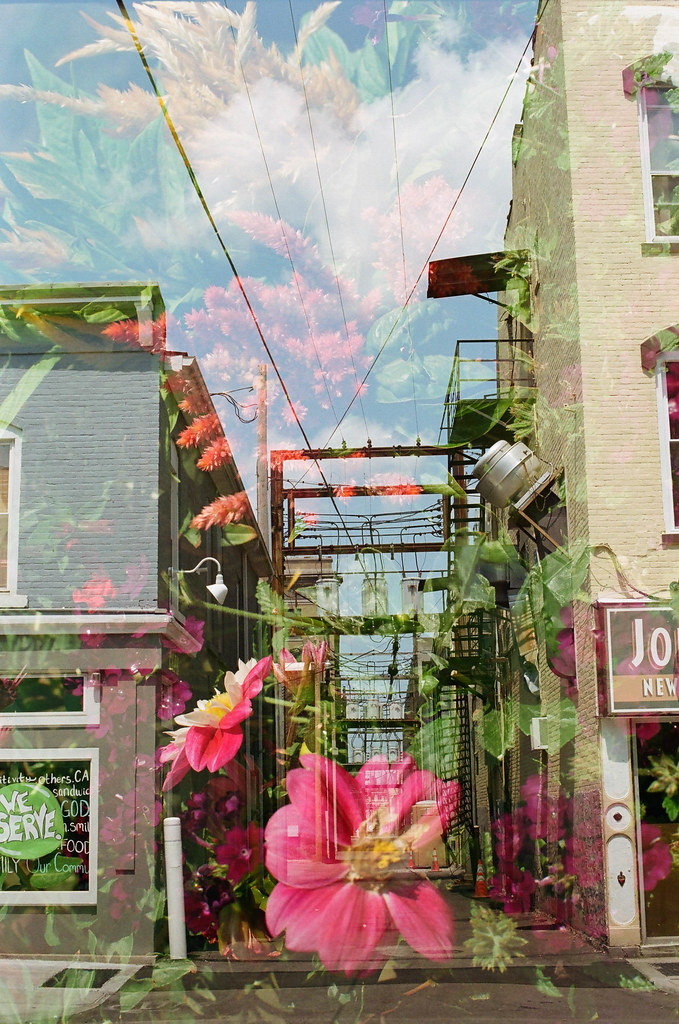 You can see a few more from this roll on my flickr album.

I don’t really know what I can say here. I’m in love.

I know when I first started to shoot film I was so excited by not knowing what I was going to get when my film was developed. I have a little more experience now, so I pretty much do know what I’m going to get, but I’m still chasing the fun of the mystery, which is why I’m drawn to expired films, film soups, new (to me) old cameras. A guarantee of not knowing what you’ll get, and so you’ll definitely get a surprise (good or bad).

In prep for a film secret Santa exchange last Christmas, I chopped up some fresh ginger, squeezed the juice out of a lemon, and boiled the ginger and lemon with some water for, oh, I don’t know, a while. Then I let the concoction cool and dropped two rolls of film into it to soak for, oh, I don’t know, another while. Then I took them out and rinsed them and dropped them into a baggie with rice to dry for a few weeks, and then I mailed one to my secret Santa recipient in California and kept the other for myself.

I’m still kind of bad about noting things and I kind of thought I would remember which roll I soaked, but of course I didn’t. So I forgot all about it until I put this roll in my Minolta SRT-102 a few weeks ago and it was just a little crispy feeling when I tried to advance the first few frames and a lightbulb went off in my brain and ta-da! I remembered about that film I soaked over the winter.

Anyway. Color shifts, streaks, green bubbly-looking spots. Be still my heart. I soaked some film in sparkling honey mead last summer and was happy with that. This venture has made me equally happy.

You can see more from this roll here.