I am always so grateful for a few days off of work and a complete change of scenery. Even more grateful to spend that time with the person who knows me best, outside of my family. My best friend Kelly and I went to Tuscany together the year we both turned 40. At that time we made big plans for our 50 trip, thinking our lives would be so knitted up that a big trip would be easy. But life doesn’t ever seem to work that way and so in August we booked a short October trip to California with a drive up highway 1, Mendocino, Napa Valley wineries, and Airbnb. It didn’t disappoint, and we’ll just have to hope our lives let us put together something a bit longer for the next one. We also decided that decade trips are too far apart. Where’s the guarantee that we’ll be around in a decade? Every five years from here on out.

We spent our first night in a bed in a house with a treacherous driveway in Mill Valley and then started the drive north to Mendocino on Wednesday morning, taking our time for stops along the way.

Is it terrible that I can’t remember now where we were half the time? Talking and laughing and driving and navigating… all those things took precedence over taking notes about where we were or what I was photographing. Rocks, ocean, coastline, view from atop a cliff. There is no shortage of this along California’s western edge. I’d never seen California’s coastline until this trip and I think it’s safe to say that 1,000 times wouldn’t be enough. It’s breathtaking. 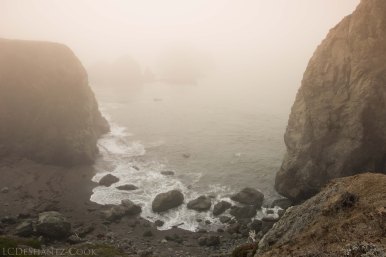 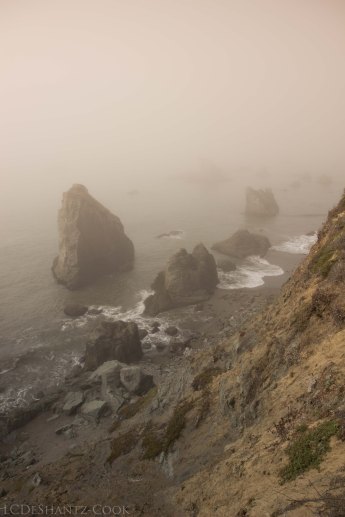 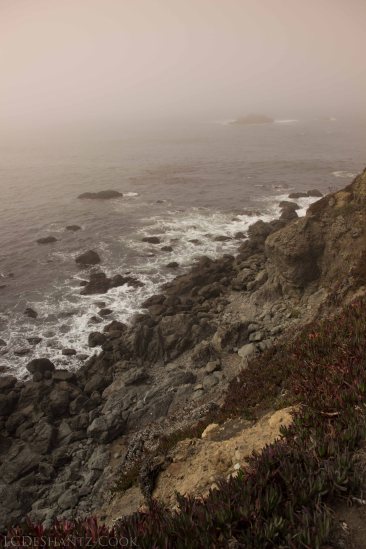 Every time we came around a corner and I would gasp at the view, Kelly would say “hang on, it gets better.” I loved the fog and these rocks somewhere on the coast as we got closer to Mendocino.

The first night in our cabin, we drank a bottle of wine Kelly bought and saved from our trip to Tuscany a decade ago (it aged beautifully), which we paired with local cheese we bought on the way.

We went to a lovely little yoga studio in Mendocino one morning and then spent the rest of that day outside, first at the Point Cabrillo light station and then further north to a park where we hoped to see sea lions (we could hear them in the distance, but we never saw any).

I think these pink flowers are amaryllis belladonna. They were everywhere, and so pretty!

I liked this view from the light station in black and white. 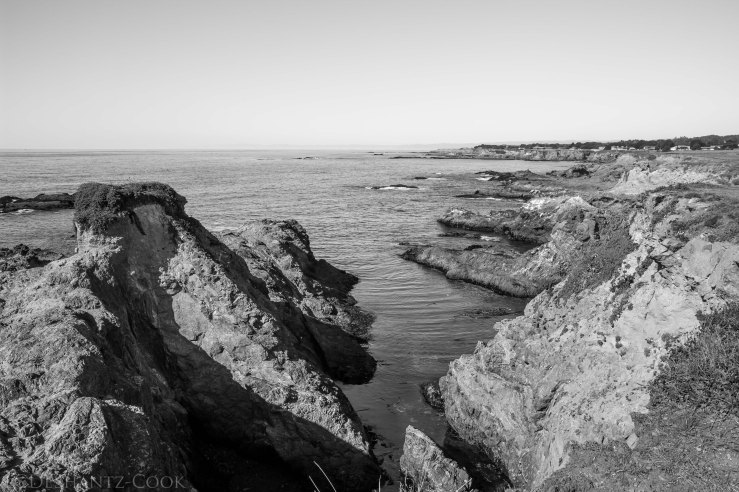 I think this was just north of Mendocino… we pulled over as the fog was going back out and I saw these foggy rays through the trees. 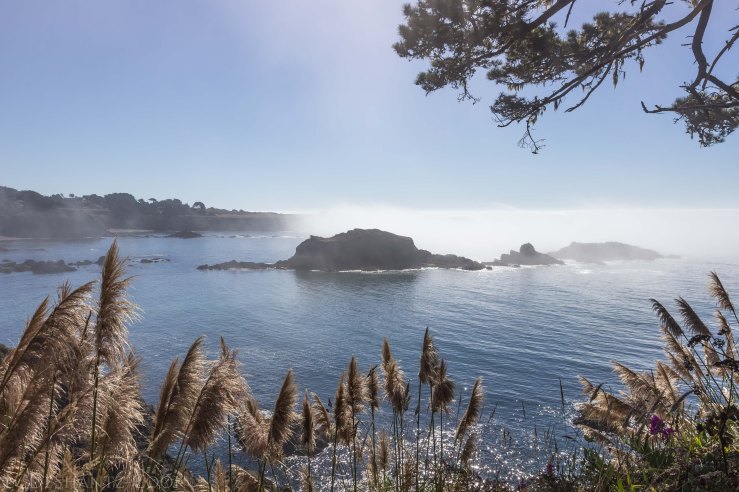 We drove up to the Avenue of the Giants on Friday, taking in the sights at various turnouts along the way.

I don’t get carsick (thankfully), but I can see how some people can probably never, ever drive or be a passenger on that route. Twists and turns. Hairpin turns on sharp inclines and steep descents. Narrow or no shoulders. Mostly no guardrails. Literally, a sneeze could send you plummeting over the edge. Maybe I’m being dramatic, but I was both awestruck and completely terrified. Fortunately Kelly is a confident driver and she did all the harrowing stuff while I got to mainly drive the inland, far less harrowing, routes. Yay for that.

Saturday morning we left our sweet little cottage in the forest and drove inland to Napa Valley, where we stopped at one vineyard, ate lunch at another, and then ultimately landed at a third for an absolutely magical tour and tasting. This was where I experienced rather than photographed, and I could kick myself a bit for that because the light and the grounds and our tour guide and the wine was just all kinds of magical.

After dinner in wine country we made our way back to Mill Valley for our last night in bed in a third stranger’s house. We had just enough time Sunday morning to make a few stops to view the Golden Gate Bridge in a bit of haze and too bright sun before getting to the airport. And that’s it. Too few details, I know, but experiences and laughter. So much laughter. That’ll do. Until our next trip, anyway.