There’s this thing that happens on Lake Michigan, and the other Great Lakes, and probably other large bodies of water, too. When conditions are just right–and here, that’s when the air starts to warm up but the lake water is still cold, or late spring–there is a confluence of temperature and bending light rays that lets you see things you aren’t ordinarily able to see, namely buildings and light that are far beyond the reach of normal vision and the curve of the earth. It’s called a temperature inversion, and like rainbows and fog-bows and northern lights and water spouts and other magical things, when you get to see one you feel a little changed.

I won’t get science-y about it because I don’t want to write about things I don’t understand all that well, but the first time I got to see this phenomena was a Memorial Day weekend about five or six years ago. There was a small group of us on a neighbor’s deck, and I kept wondering if I was seeing some abnormally tall freighter out on the horizon. Only it wasn’t moving, and soon it was joined by other abnormally tall freighters that weren’t moving, and then as the sky darkened there were white and red lights around these structures, some blinking and some steady, and we realized we were seeing the buildings from the city across the lake… which was 80 miles across the lake. One of my neighbors fortunately knew that we were seeing was a temperature inversion so we weren’t in the dark about it for very long.

Anyway, last evening I just had a feeling it might happen. There is a chunk of land south of our cottage that juts out into the lake, and a few hours before sunset it looked weird. Weird as in higher than it normally is, and if you watched this chunk of land as you walked down the bluff to the water line, it changed. It looked like a mirage was happening. I figured the conditions might just be right for an inversion. 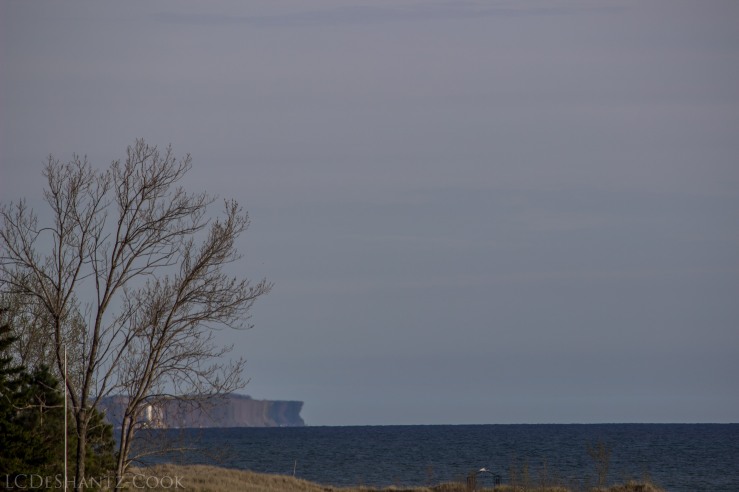 I don’t have a high-end lens for capturing things far away, so these will have to do. The first image is from the top of the bluff, and the second is how things looked just walking down the stairs to lower on the bluff. It went from looking like a cliff to looking like a big alligator jutting out into the lake. On a normal day, this bit of land looks more like the top half of the second image (the alligator’s top jaw and up). A little elevation, yes, but no cliffs.

I wish I had pictures of last night’s inversion, but I don’t think I could have done it justice. So, maybe just imagine it: a crisp, dark night full of stars; a chorus of Spring Peepers; a fairly quiet Lake Michigan; a quarter moon leaving a dazzle on the lake; bright lights, white and red, some blinking rhythmically (think traffic lights), in city clusters, for miles and miles across the horizon.

2 thoughts on “am I seeing things, or is that just an inversion?”