Last month, I felt like I was on a mission to capture the last bits of color before the bleak winter set in. It’s not like there are never any blue skies in the midwest in the winter–of course there are lovely sunny days. And there is color. There are warm sandy-colored grasses like phragmites and bullrush and other marsh-dwelling plants that dry into warm shades. There is still green grass here and moss, too. But the colors are much less riotous. Everything seems subdued. And when blanketed in snow, all is white and shades of gray. Still beautiful, but it tends to wear on a girl who craves color and contrast and is stuck in cement-bound suburbs for the winter. But maybe I need to look at winter as a creative lesson? I guess we’ll see in the coming months.

I shot some film in November. Color (Kodak GC 400 and my current favorite, Ektar 100), black and white (Kodak Tri-X, which I am finding I really like a lot), and my last roll of Lomography lomochrome purple (which I still think is some kind of ridiculous, happiness-inducing, magical magic trick). I managed not to buy any new cameras although I’ll admit to scouring eBay listings and dreaming of my next purchase (I may have bought a couple of old lenses but they were super cheap). I used the two Minolta’s (SRT 102 and X-700), the Pentax K1000, and the Olympus EE3 in November. I’m not bored with any of these yet and still learning some of their differences and quirks. It’s too difficult and probably unnecessary to zero in on just one, so I’m not going to.

Stay tuned to one of my other favorite places right now, EMULSIVE, which in April will feature an interview with… me. Yes, me! A relative newbie to film! I love the community that EMULSIVE has built, with an exchange of creativity and a wealth of information for people like me who have fallen head over heels and all punch-drunk in love with this craft. And, maybe most importantly, offers up for your viewing pleasure a ton of gorgeous (film) photos from some incredibly talented photographers.

So, while I got this film processed weeks ago, I wanted to take my time so that I could choose a few images that wouldn’t be anywhere else (as in here) before they show up on EMULSIVE. My two very favorites from November will be featured there first.

I’m also still trying to figure out how I want to display photos here. I’ve used headers and grouped images by camera (I think I did this for October’s shots). Do I caption each with the camera and type of film? I know when I look at other people’s photos, this is something I like to know. So I’ll try that this time. Do you like to know what kind of film and camera, or is that info overkill or detracting?

Technically these are not November photos… but Margi came to visit in very late October and this roll got finished in November, so there you go. Not so much a film fan but a Margi (Chicago dancer, teacher, choreographer) fan? The digital images from her visit are here.

And, my maiden attempt at a double exposure. Which didn’t turn out exactly how I invisioned but that’s how things go. I attempted to keep the camera still (via tripod), so the trees and bird would remain still, but there would be two Margi’s. Instead it looks a little like a psychedelic trip. See? Learning process.

Mostly images from the west side of Michigan, although I finished two rolls in a local metro Detroit park. A few images here are the ends of those rolls. 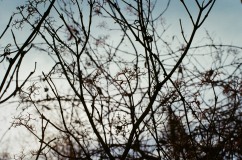 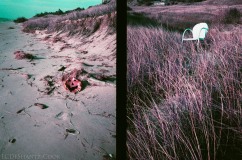 We were lucky enough to again spend our Thanksgiving at the cottage with the people we love best. Of course I ditched them all to be outside as much as possible, but otherwise we had plenty of togetherness and merry-making. 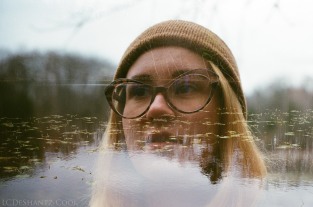 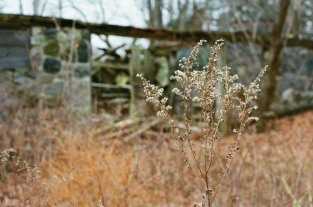 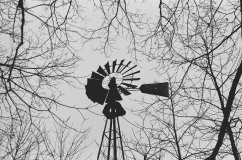 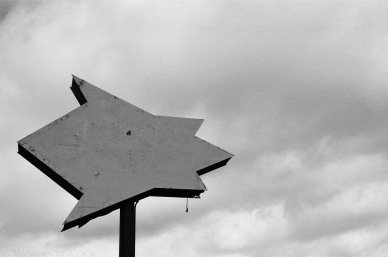 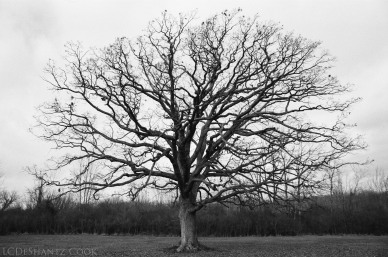 I’d been a little hesitant to shoot black and white film, but I think I’m over that now. Out of November’s four rolls, I think I most love the images I took using Kodak Tri-X. I still have plenty of other films to try out, so I’m not calling any favorites just yet…

8 thoughts on “November on film”